With a variety of storage devices available today, it can be difficult to match drives with data types and data center environments. You have to consider factors such as random access performance, sequential performance, cost, density and reliability, and often more. With so many considerations, market hype could steer you toward a fad. Gary Watson, chief technology officer at Nexsan, outlines five best practices to consider when selecting drives for your storage deployment to ensure the best price and performance for your needs. Click through for five best practices to consider when selecting drives for your storage deployment, as identified by Gary Watson, chief technology officer at Nexsan. 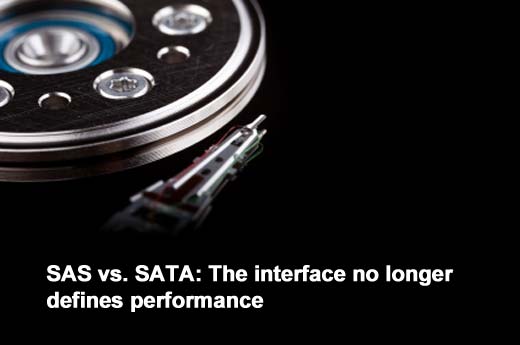 In the past, SAS and SATA were used as convenient shorthand for fast (SAS) or dense (SATA) disk drives. Now, however, we have SSD drives with SATA interfaces as well as inexpensive and dense but relatively low-IOPS 7200 RPM drives with SAS or even fibre channel interfaces. Users can no longer make blanket assumptions like “SAS is better for databases.”  For example, if we’re comparing a blazing fast SLC SSD with a SATA interface vs. a relatively sluggish 7200 RPM NL-SAS drive, the incorrect assumption could have significant negative implications. In the quest for bigger profits, many storage companies are moving to a logistics model where a drive is not tested in the storage array until it arrives at the customer site. Others are phasing out the rigorous qualification and ongoing screening process that once was commonplace. Some no longer perform specific qualification checks between drive hardware and firmware revisions, and the hardware and firmware revisions of all the components of the storage array. This is a recipe for disaster, especially with large numbers of drives at a site.

You want to make sure the disk drives you are getting are “enterprise-class,” not consumer grade. Enterprise-class disk drives are those that pass the manufacturer’s highest quality and reliability tests. Frequently, new drive technology appears in consumer products before they are released in storage systems designed for data centers, and rightly so. Ask about testing and quality standards in place. 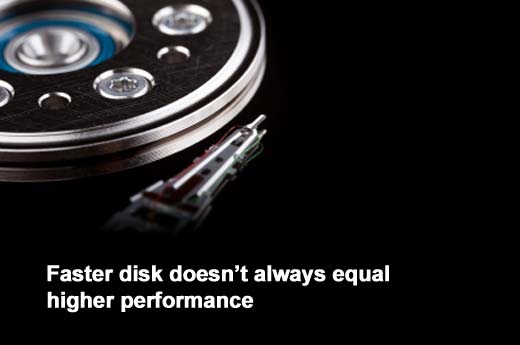 Somewhat surprisingly, 10,000 RPM or 15,000 RPM drives are not always better for high performance storage demands, such as video and other media streaming applications. That is unless there are numerous independent streams being written or read from the same RAID set. In fact, 4TB 7200 RPM drives have higher sequential speed than 3TB drives and often have higher sustained sequential performance than 15,000 RPM drives. In small RAID sets, the performance limitation might be the drive transfer rate. In large RAID sets, or with large numbers of drives behind a single controller, the limiting factor is likely to be the RAID engine or the SAN interface technology rather than raw disk speed.  So, drives may be chosen based on other factors, such as cost, density or reliability. 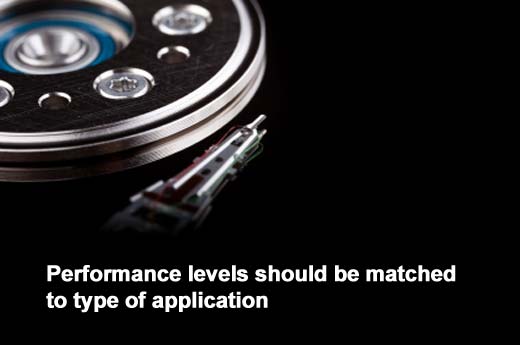 The random or transactional (IOPS) performance of spinning drives is dominated by the access time, which, in turn is determined by rotational latency and seek time. Interface performance has almost no influence on IOPS, except in the negative sense that complex or new interfaces sometimes have bloated or immature driver stacks that can hurt IOPS. Highly random applications that benefit from high IOPS drives include email servers, databases and hypervisor environments.

Sequential performance, which is important for applications like video and D2D backups, is dominated by the RPM of the drive times the bits per cylinder. This number will decrease 50 percent or more as the drive moves from the outermost to the innermost cylinders. Again, as long as the interface is fast enough to keep up (and it is in all modern hard drives), the interface speed (or even the quantity of interface ports) has no measurable effect on sustained performance. The fastest drives today can sustain less than 200 MB/s, which is less than the performance of a single 3 GB SATA port. Storage vendors have a seemingly endless variety of pricing models, but one constant seems to be that 2.5” systems cost twice as much per gigabyte as 3.5” systems, assuming both are using enterprise-grade drives. But the 3.5” solution will be far more reliable. 10,000 and 15,000 RPM SAS solutions in either 2.5” or 3.5” form factor will be approximately three to six times more expensive per gigabyte. 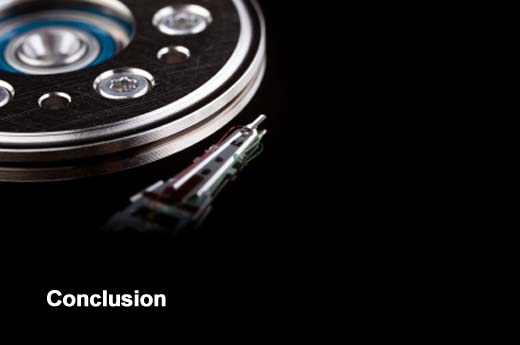 There are many considerations when selecting the right drive type for your environment.  Don’t let market hype sell you on something just because it’s today’s fad. These five tips can help you sort through some of the confusion.  Be clear on your requirements and on the drives, interfaces, price/GB, and finally, reliability available in what you select.  Then you are in a better position to make the right choice for your needs.