A Presidential History of the ‘Dog Ate My Email’ Excuse

Ever since email first entered the White House, presidential administrations have used the “I lost my email” excuse to evade all sorts of controversies. Most recently, Lois Lerner – who ran a key division of the IRS – tried this excuse, but it turns out the government IT infrastructure was too good. Backup and recovery technologies have become significantly more advanced and, in the case of Lerner, the emails were eventually found on a backup tape.

Alas, we live in an age when “The Dog Ate My Email” has lost its bite. “Losing it” is no longer a believable excuse. Most recently, questions have been raised about why Hillary Clinton and Jeb Bush chose to use private email accounts as Secretary of State and Governor of Florida, respectively. In this slideshow, Unitrends details the presidential history with emails. 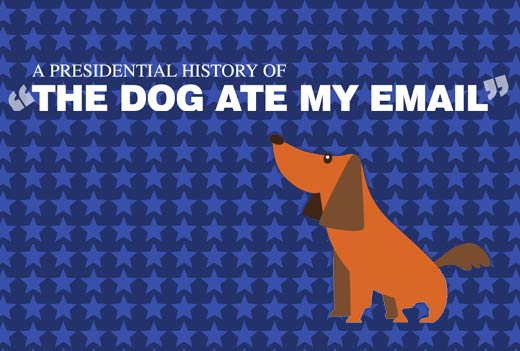 ‘The Dog Ate My Email’

Click through for a review of the presidential history with email scandals, as identified by Unitrends. In 1993, whitehouse.gov launches, creating the era of e-government, email goes mainstream and email backup becomes core to PRA compliance. Due to the low effectiveness of backup technology at the time, plausible deniability was high. During a congressional investigation into Clinton/Gore fundraising, White House lawyers say thousands of the vice president’s emails were lost and not recoverable. Again due to the difficulty in using the backup technology of the time, plausibility due to technical glitches remained high. Two incidents occurred in this time period. The first involved the Valerie Plame controversy, in which Bush White House staffers allegedly leaked the identity of a CIA officer. The explanation for lost emails was a backup system upgrade. The second incident involved the dismissal of eight U.S. attorneys under controversial circumstances. The lost emails were blamed on use of the RNC-hosted server, not the White House server. While backup technology during this period was improving, plausible deniability was still high. During the congressional probe of the IRS for allegedly targeting conservative groups, the IRS commission claimed that Lois Lerner’s emails were lost in a 2011 computer crash. They were later found on backup tapes, triggering a criminal investigation. On April 1, 2015, it was determined that no charges would be filed against Lerner. Backup technologies have improved their effectiveness and accessibility, greatly reducing plausible deniability. Both Jeb Bush, as Governor of Florida, and Hillary Clinton, as U.S. Secretary of State, circumvented established government backup infrastructures by using private email accounts. According to Unitrends, plausible deniability is still to be determined.