Flash storage technology has become a part of our everyday lives. From the devices in our hands to the servers in data centers, flash memory has become a technology that touches everyone. Still, for all its prevalence, flash technology is only in the early stages of its evolution. There are many different types of flash and choosing the right one for a particular application is critical.

Where flash technology was once considered too expensive for large applications, it is reaching the economic tipping point. IT departments are making the shift from disk to flash, because as the cost of solid state storage goes down the economics of performance justify that shift. However, choosing the right flash solution is still a challenge. What is the right type of flash for your needs? Each variety of flash has its own set of nuances, pros and cons based on its configuration within the hardware and pre-destined performance when manufactured.

In this slideshow, Violin Memory discusses the differences in performance benefits of each flavor of flash starting from the fundamental properties of the chips themselves to the controller and configuration within the array. Learn why this all matters and what happens when different ingredients are blended together. 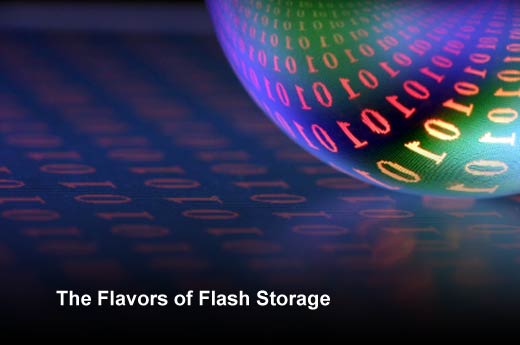 The Flavors of Flash Storage

Click through for more on the different types of flash technology available, as well as the performance benefits of each one, as identified by Violin Memory. In reality, there are only three types of NAND flash: SLC, MLC and TLC. The differences between them seem simple. With flash, bits are written to areas called cells. The differences between the types of flash relate to how many bits can be written to a given cell; single-level cell (SLC) writes one bit, multi-level cell (MLC) writes two bits, and triple-level cell (TLC) writes three bits. There is more to it than that, though. Each type has considerably different characteristics, including performance, cost and endurance (how long the flash can be used). What makes flash enterprise flash? SLC flash delivers the highest performance and has the longest lifespan of the flash technologies. Naturally it is also the most expensive, so it is usually only used in highly specialized applications. TLC is the least expensive of the three types, but it also offers the lowest performance, shortest lifespan and highest error rates. TLC is generally found in low-cost consumer electronics. MLC flash is the most commonly used type of flash. It offers better performance and endurance than TLC and lower cost than SLC. Costly but cost effective: The case for eMLC. Within the descriptor MLC, there are the sub-categories eMLC and cMLC. In these cases, the “e” stands for enterprise and the “c” for consumer. While still being MLC technology, they represent higher performance and longer life for eMLC and correspondingly lower cost for cMLC. Products that use these technologies can offer very different levels of performance and endurance depending on how they are architected, and results can vary significantly depending on the manufacturer and implementation. Fast now and even faster later: The case for MLC. In order to understand the difference between a commodity MLC SSD and enterprise MLC array, you must understand what happens when flash is used up to the limits of its datasheet. Unlike traditional HDDs that fail over time due to mechanical wear, flash memory has a limit to the number of times each cell can be written to. SSDs have only a small number of dies (areas where the cells reside) and are significantly impacted when they reach their write limit. Enterprise flash arrays, on the other hand, can have thousands of dies and can be protected through redundancy. Also unlike mechanical drives, which seem to get slower and slower as they age, flash actually gets faster as it wears. Hardware configuration: Yes it matters. As with all things technology related, architecture matters. SSDs are flash drives that have been made to look, and to a degree, act like a HDD. While this makes it easy to put flash storage into existing systems, it is not the optimal way to design flash into a system. Systems that have been designed to provide an optimal combination of flash storage access and failover redundancy are going to provide better performance, lower latency and higher reliability than a system that has it added as an option.