At the VMworld 2016 conference this week, it became more apparent just how comprehensively VMware has changed its approach to desktop computing. Rather than focusing solely on desktop virtualization, VMware is now pursuing a more holistic approach that spans everything from providing mechanisms for managing the authentication of endpoints to full-blown workspaces through which end users can access multiple applications.

This week VMware furthered its desktop ambitions by not only adding support for Windows 10 across its portfolio, but also adding support for a VMware Blast Extreme protocol that promises to reduce the amount of bandwidth images consume by a factor of six. That new protocol is intended to replace the PC-over-IP (PCoIP) protocol developed by Teradici that VMware previously relied on. At the same time, VMware added support for wide area network (WAN) optimization technologies from Riverbed Technology to improve overall performance even further.

Finally, VMware also extended the authentication capabilities of the VMware AirWatch platform to include support for Microsoft Office 365.

Rather than trying to virtualize every desktop, Dave Grant, senior director of product marketing for the End-User Computing unit at VMware, says VMware is now pursuing a modest agenda. At the moment, Grant estimates that only 10 to 15 percent of desktops today are virtual. As desktop virtualization in the form of the VMware Horizon becomes less expensive to deploy and easier to manage, Grant says that number might reach as high as 25 percent. 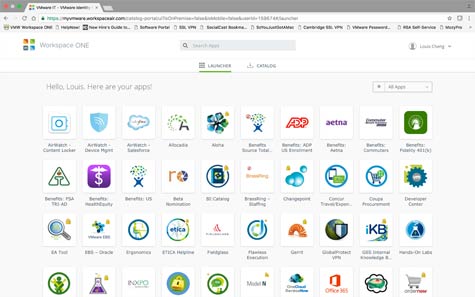 But VMware also has grander ambitions. The VMware Workspace ONE portfolio enables IT organizations to deploy a complete workspace including third-party applications that end users can deploy at will. The goal, says Grant, is to make managing desktop computing much simpler.

But even if IT organizations don’t buy into that entire vision, VMware is determined to remain relevant by providing endpoint management tools via the AirWatch portfolio.

“Not everything has to be about desktop virtualization,” says Grant.

No doubt it will be interesting to see how VMware, in collaboration with Dell Technologies, will advance those goals once the merger between EMC, the parent company of VMware, and Dell is complete. In the meantime, it’s increasingly clear that VMware’s ambitions for the desktop now go well beyond basic virtual desktop infrastructure (VDI).

Previous article5 Enterprise iOS Mobile Device Management Best Practices
Next articleFour Years After the Breach, Dropbox Admits It May Have Underestimated the Impact