Eight Reasons Why Organizations Should Virtualize

The backup and recovery of physical machines is often hard enough, but throw in a few thousand virtual servers, and things can quickly become untenable.

The latest vendor to address this issue is Symantec, which today released version 7.6 of NetBackup that not only scales to support petabytes of data being generated by thousands of VMware virtual machines, but can also now recover data 400 percent faster.

Despite the rise of virtualization, backup and recovery is still subject to the laws of physics. Thousands of virtual machines that first need to be backed up and then restored along with the applications running on them require managing backup and recovery at a level of unprecedented scale.

Drew Meyer, director of marketing for integrated backup at Symantec, says Symantec addressed this issue by taking advantage of VMware Changed Block Tracking capabilities to make backup 35 times faster. Working with NetApp, Meyer says that IT organizations can make use of NetApp’s snapshot software to back up as many as 300 VMware virtual machines in 300 seconds. 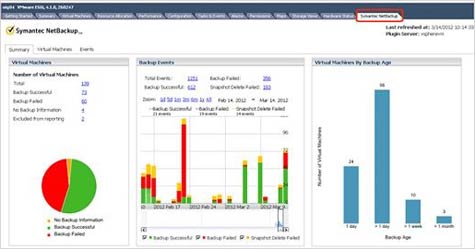 For recovery, Symantec NetBackup now boots directly from backup storage, versus having to rely on primary storage. That capability, says Meyer, makes recovery as much as 400 times faster.

Meyer concedes that no shortage of options exists when it comes to backing up virtual machines these days. NetBackup, however, now supports both physical and virtual servers; it’s optimized to handle virtual machines that over time tend to grow in size. The end result, says Meyer, is an approach to backup and recovery that can rise to both the size and quantities of virtual machines that are becoming prevalent across the enterprise.

Support for other types of virtual machines is obviously on the way, but Meyer declined to make any specific commitment to other virtual machine platforms just yet. In the meantime, with the rise of software-defined data centers (SDDCs), Meyer says IT organizations will need backup and recovery software that not only scales, but is also tightly integrated with the policy engines that make SDDC possible in the first place.