Too many companies are anti-innovation without even realizing it. That’s the conclusion drawn by Ed Hess, a professor of business administration at the University of Virginia’s Darden Graduate School of Business and co-author, along with Jeanne Liedtka, of “The Physics of Business Growth: Mindsets, System, and Processes.” In order to stifle what’s stifling innovation, Hess advises that companies dump these four entrenched ways of thinking.

Too many companies are anti-innovation without even realizing it. That’s the conclusion drawn by Ed Hess, a professor of business administration at the University of Virginia’s Darden Graduate School of Business and co-author, along with Jeanne Liedtka, of “The Physics of Business Growth: Mindsets, System, and Processes.” In order to stifle what’s stifling innovation, Hess advises that companies dump these four entrenched ways of thinking. 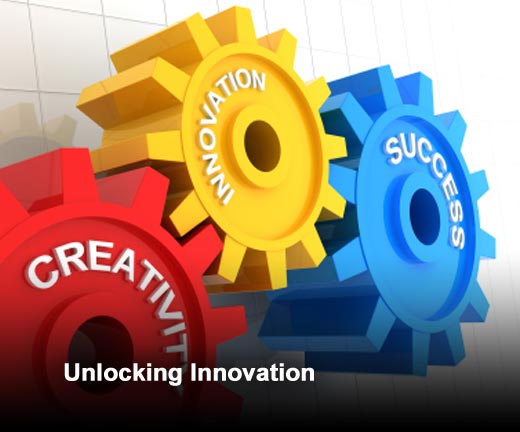 Click through for four ways of thinking that must be discarded in order to unlock company innovation, as identified by Ed Hess, a professor of business administration at the University of Virginia’s Darden Graduate School of Business and co-author, along with Jeanne Liedtka, of “The Physics of Business Growth: Mindsets, System, and Processes.” The organizational design and management theories that gave rise to the dominance of industrial scale and efficiency in production assembly lines still dominate management practices today. And generally, the bigger the company the more the focus is on efficiency, scale, and low-variance operational excellence. The culture, behaviors, processes, measurements, rewards, and tolerance for failure needed to drive operational excellence are fundamentally different from those needed to create innovation, which requires an emphasis on exploration and invention. 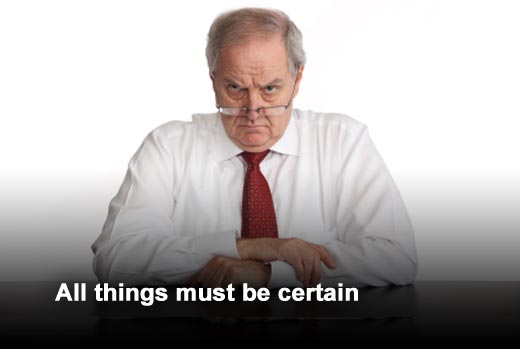 Most companies have difficulty accepting the most fundamental natural law of innovation: The only certainty is uncertainty. With innovation, the dominating forces are ambiguity and change; and the processes at work involve exploration, invention, and experimentation. The pursuit of growth and innovation is inherently messy and inefficient.

The mindset, culture, and processes that drive successful execution in an existing business can, if unexamined, drive innovation into the ground, exhausting and discouraging the very people who are trying hardest to accomplish it and killing inventive ideas before they see the light of day. All because many big companies have devoted themselves wholeheartedly to the mantra that “variation is the mother of waste.” Bottom line: To be innovative, you must be willing to accept failure. Most scientific discoveries are built upon extensive learning from prior experiments. The same is true in innovation. Innovation is an iterative experimentation learning process. In reality, most innovations are not industry-changing disruptions.

Most innovation is close-to-the-core improvements or add-ons or extensions to adjacent markets. The kind of ideas we want to generate — the kind we’ll call creative — are all about creating new value for customers. We don’t care if it’s already been tried or looks like “old wine in new bottles” or has been borrowed from another industry. Does it create value for your customers that no one else has yet offered them? If the answer is yes, congratulations! You’ve got a winner.

Chances are, most of the components of the valuable ideas generated will have been floating around in some form or another — perhaps for decades. Good innovators learn how to combine existing things differently or transfer concepts from different industries or domains. 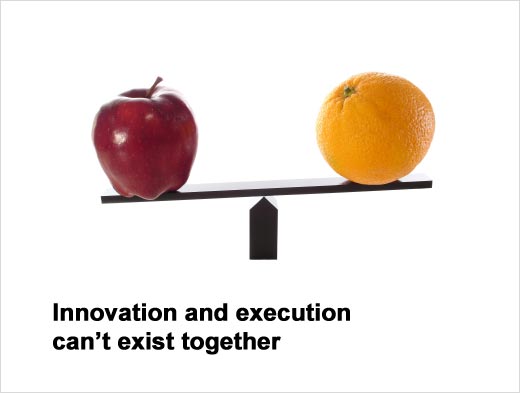 Famed physicist Geoffrey West of the Santa Fe Institute hypothesized that corporations begin to die when they reach the level of 50 to 100 employees because they become dominated by bureaucracy that kills creativity and innovation. In effect, he is skeptical that big companies can prevent the “physics of stability” from killing innovation. Most management theorists have thrown up their hands and concluded that an organization either has to segregate its innovation activities from its execution activities, or in the alternative, change organizational design from execution dominance to innovation dominance when innovation is needed.

The management challenge facing U.S. companies is to deal with these realities and better manage the inherent inconsistencies, conflicts, and tensions between operational excellence and innovation. Yes, the bigger you get the slower you get — the less agile you are and the more likely you have to buy your innovation. But there are many companies that fight this reality by first recognizing that the “physics of stability” is different from the “physics of growth.” Learning is the bridge that connects operational excellence and innovation.

A learning culture with different learning processes and tolerances for failure, for innovation, and for operational excellence is the answer. Empower and create small innovation teams. Protect those teams from the dominance of the “no-variance” operational excellence mindset. Create a safe zone where experimentation failures are learning opportunities. Do not punish failures; instead, celebrate the learning that comes from trying. And finally, understand that growth experimentation is a probability game, and the sooner you get customers actively engaged in your experimentation game, the more likely you will win.