The race is on to consolidate as many security and networking services as possible within the branch office. Versa Networks today announced that it is expanding the scope of services that can be hosted on its software-defined wide area network (SD-WAN) platform to include wireless and Ethernet switching, anti-malware security software and high-speed Long Term Evolution (LTE) networking services.

In addition, Versa Networks is now making it possible for a range of third-party network services to be deployed on top of its platform in the form of virtual network function (VNF) software that replaces the need for a physical appliance with an application that can run on multiple platforms.

Versa Networks CEO Kelly Ahuja says this latest extension of the Versa Cloud IP Platform extends the concept of thin branch computing to the point where IT organizations now can not only replace routers, firewalls and wide area network (WAN) optimization appliances, but also every other appliance distributed across an extended network. That approach not only reduces the cost of acquiring those services, it significantly reduces the cost of operating the environment, says Ahuja.

While the SD-WAN market is relatively nascent, the category itself is among the fastest growing in the network market. In some cases, IT organizations are employing SD-WANs to replace routers in the branch office. In other cases, the SD-WAN is being deployed as a network overlay alongside the router as part of a more extended transition. 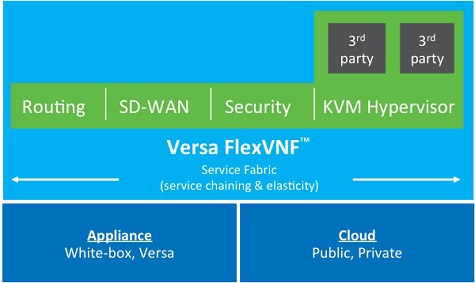 To compete more effectively for that business, Cisco just acquired Viptela, a provider of an SD-WAN platform. Ahuja says that while it’s obvious why Cisco needed a viable SD-WAN platform, the more interesting issue is why the management of Viptela felt the need to sell the company now. Ahuja says as the SD-WAN market matures, it will become apparent that some of the players in the space did not build platforms capable of aggregating a wide variety of networking and security services.

“The more interesting question is not why did Cisco buy Viptela,” says Ahuja. “It’s why did Viptela sell.”

Competition across the SD-WAN category is already clearly fierce. The real issue will be to what degree can relative upstarts such as Versa Networks usurp a host of incumbent networking and security vendors that all have a piece of the highly fragmented branch office market.