Venafi, a market leader in enterprise key and certificate management (EKCM) solutions, recently released its cybersecurity and vulnerability predictions for 2013. At the top of its predictions list is that organized cyber criminals and hackers will leverage digital-certificate-based attacks to infect enterprise IT systems with state-developed malware such as Flame and Stuxnet. The results will impact business operations adversely, and could lead to data breaches and brand damage.

“Many pundits, leading media outlets and even some security experts are reporting that enterprises needn’t be overly concerned about Flame and Stuxnet-style malware, citing the fact that they were executed by well-funded government intelligence and military groups whose targets were hostile nation-states and not businesses,” said Venafi CEO Jeff Hudson. “However, our view is that companies should be concerned, as the tools and techniques used to execute these types of attacks are, unfortunately, now in the hands of common criminals and rogue entities. In the coming year, such attacks are likely to increase, especially against enterprises, and are likely to result in major data breaches, unplanned outages and significant disruptions to businesses.”

Venafi bases its predictions on hard evidence, not conjecture. In 2012, Chevron (No. 3 in the Fortune 500 rankings) admitted that it had found the Stuxnet malware in its systems. Chevron has since publicly stated that it does not believe the U.S. government realizes how far and wide the malware has spread. Although reports indicate that the incident did not cause damage or result in data loss, it proves that digital-certificate-based attacks are no longer hypothetical or confined to state vs. state cyber war scenarios.

In addition to predicting increased trends in enterprise attacks, Venafi has also researched the overall enterprise security landscape and developed a number of other predictions highlighted in this slideshow. Click through for the top security risks expected in 2013, as identified by Venafi. 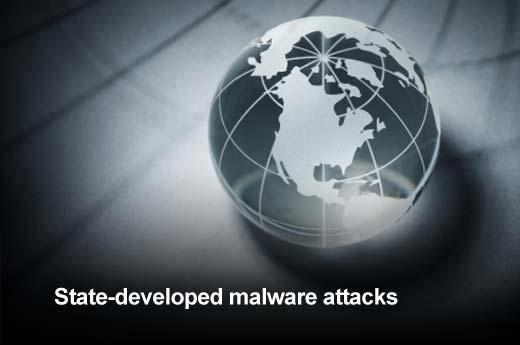 Cyber criminals using state-developed techniques to invade the enterprise. At the top of its predictions list is that organized cyber criminals and hackers will leverage digital-certificate-based attacks to infect enterprise IT systems with state-developed malware such as Flame and Stuxnet. The results will impact business operations adversely, and could lead to data breaches and brand damage. 4G-driven mobility and BYOD compliance will cause security and audit nightmares. The availability of near-desktop speed on laptops, tablets and smartphones will lead to a larger number of mobile BYOD users accessing sensitive and regulated corporate data. Organizations that do not have effective management and controls in place for BYOD and related WiFi networks and VPNs, along with their related digital certificates and encryption keys, will find themselves spiraling into a security and compliance nightmare that will result in breaches, fines and brand damage. MD5 and other weak encryption algorithms will cause breaches. Statistical data gathered by Venafi indicates that nearly all Global 2000 organizations have deployed weak, easily hacked, MD5-signed certificates in their environments. MD5 is the broken certificate-signing algorithm used by Microsoft that allowed hackers to bypass Microsoft security and infect thousands of computers with Flame malware. Once in place, Flame was able to gather sensitive information from the targeted devices. With nearly one out of five certificates deployed across the Global 2000 still using MD5, it is highly probable that related breaches will continue. The cloud becomes a serious target. The wave of regulators and cyber criminals taking aim at businesses and governments using the cloud has just begun. In the U.S., cloud providers like Amazon and Microsoft now offer compliant cloud services, including HIPAA for health care or FISMA for government. Their effectiveness is unproven. In the UK, the Information Commissioners Office (ICO) outlined a plan for protecting cloud data while complying with UK and European data protection directives. The ICO can fine organizations £500,000 per violation and states that encryption and “robust key management” are requirements for compliance. With these changes, it is clear that in 2013 regulators globally will take action against organizations that fail to protect data in the cloud. Security budgets will rise. All signs indicate that most IT security budgets will grow in 2013 due to the increased attention to breaches and to security teams doing a better job articulating both risk and business value. Security projects that can help accelerate strategic projects and reduce work elsewhere are certain to have the best chances of funding in 2013. Enterprises will realize that they are responsible for ensuring trust and will develop effective continuity and recovery plans. A series of security events that have taken place over the past couple of years have exposed that third-party trust providers are high-value targets for cyber criminals. Organizations know that certificate authorities (CAs) can be compromised and that these compromises can lead to devastating cyber attacks. With the assistance of NIST and other best practices available, businesses will start to plan for the inevitable.

Previous articleCurrent Tablets Are Crap: Panasonic Steps Away from the Pack and Creates Useful Business Tablet Line at CES
Next articleBest Practices for Teleconferencing with Employees Working Remotely