Survey Sheds Light on the State of the Data Breach

Recently, SafeNet released the State of the Data Breach survey answered by hundreds of U.S. enterprise security professionals. Not surprisingly, most respondents (66 percent) say they are probably going to be the victim of a data breach in the next three years. With the epidemic of security breaches from LinkedIn to universities and financial institutions, it’s apparent that everyone is a target, and more and more organizations are accepting that they might be next. Click through for findings from a survey focused on the state of data breaches today, conducted by SafeNet.

Over two-thirds of respondents expect to be the victim of a data breach within the next three years.

Expected, but even more concerning, is that a significant chunk of security professionals (one in five) said that they wouldn’t trust their own organization with their personal data. Breaches are multiplying, yet the security industry continues to rely on the same data security strategies. 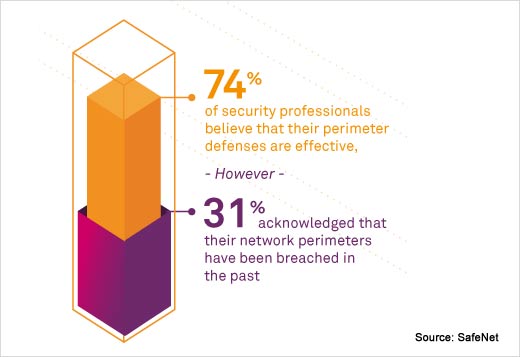 Here’s what should really shock you: even though they’re expecting a breach and don’t trust their own security, 74 percent of respondents believe their perimeter defenses are effective and most of them are planning to increase spend on those technologies. The security industry is not confident on how to thwart new threats. What is more concerning is that 20 percent said they were not even certain whether or not they had been breached, indicating that the respondents may not have the right technologies in place to detect whether an internal or external security breach has occurred. If a breach were to occur, high-value data would be vulnerable.