Software-Defined Networking and the Enterprise

Moving past its infancy, software-defined networking (SDN) is becoming a significant player in the management of IT infrastructure and network design. While implementation can be a challenge, SDN is attractive to many businesses due to its potential for cost savings, improved network performance, increased productivity and improved security.

IT decision makers were surveyed to better understand how enterprises view these networking technologies, as well as their SDN deployment plans. In this slideshow, we’ve highlighted findings from the survey. To learn more, watch a video roundtable discussing SDN in the enterprise. Click through for highlights a survey focusing on how enterprises view software-defined networking (SDN) technologies and their SDN deployment plans. The concept behind software-defined networking (SDN) has been around for two decades and VLANs (which provide more rudimentary software-based controls) even longer, but it wasn’t until the cloud became mainstream that SDN began to take off. While VLANs are currently being used by a larger segment of the market than SDNs (43 percent vs. 28 percent, respectively), SDNs are by far the more popular choice for those looking at deploying future technology. In an SDN architecture, the ability to configure, manage, secure and optimize network resources via software affords many benefits to enterprises. For some organizations, SDN does not offer enough flexibility. In response, many are turning to NFV. Like SDN, NFV shifts network management from the hardware layer to the software layer, using virtualization technologies to manage core networking functions. But while SDN focuses on the separation of the network control layer from its forwarding layer, NFV focuses more on porting network functions to virtual environments.

Although the three technologies can exist independently of each other, there is much crossover between VLAN, SDN and NFV usage. NFV and SDN in particular are often used in a complementary fashion. Among respondents, 35 percent of SDN users have also deployed NFV, and another 30 percent are planning to deploy the technology within the next 24 months. Moving to an SDN architecture has a profound impact on an organization’s IT infrastructure. It makes sense, therefore, that IT management is more heavily involved throughout the decision process. Among respondents, nearly one-third of SDN decision makers have primary responsibilities in IT services, infrastructure, or systems or networking management. Respondents help determine need, budget, create technical parameters and specifications, choose suppliers, and more.

While SDN deployments can now be found in every industry, their presence is strongest in technology-related fields and financial services. 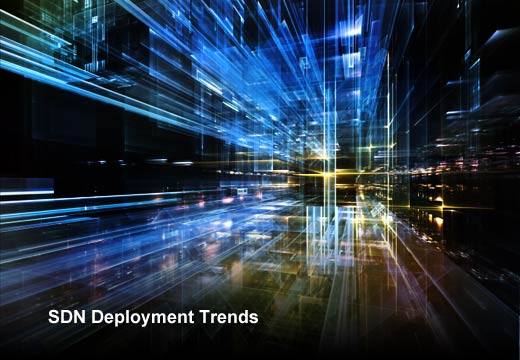 Deciding to use an SDN architecture brings with it further choices, starting with which platform to use. Organizations must choose a cloud-based deployment, virtual switches, bare metal or a combination of the three. The survey found that the cloud is the most popular of the three platforms, with more than one-quarter of respondents deploying or planning to deploy SDN in the cloud. More than half, however, are opting for a combination of cloud, virtual switches and bare metal. Deciding on a cloud-based implementation brings still more platform-related choices. From there, many organizations are turning to OpenStack, an open source cloud computing platform for public and private clouds. This is not coincidental. According to EnterpriseNetworkingPlanet and InternetNews.com Senior Editor, Sean Michael Kerner, the cloud’s abstraction of physical networking assets makes it an obvious fit for SDN. Further, within OpenStack the Neutron SDN project is the most active effort there is, and it has the support of every major networking vendor. As interest in SDN grows, so too do the solutions from which to choose. Larger companies are most likely to go with a large networking supplier. VARs are also a popular choice. For midsize companies, large networking suppliers were also the most frequently chosen supplier; however, they relied more on VARs and resellers. As far as specific vendors, solutions from Cisco, Citrix and VMware are the most commonly deployed and frequently considered. But that may change given that niche suppliers are surviving into late stages.

Previous articleDruva Employs AWS to Provide Backup and Recovery for VMware
Next articleProof that Mobile Payments Are Growing: A Super Bowl SNAFU