Ron Haigh, president of the Virtela arm of NTT, says via a NTT SD-WAN Service Portfolio managed by Virtela, IT organizations can not only mix and match SD-WAN appliances from a variety of vendors, they can also integrate firewalls and wide area network optimization (WAN) appliances. Virtela manages the network, including providing access to the analytics to optimize traffic flows across a global network.

Haigh says NTT SD-WAN Services mitigates the vendor issue by providing an SDN overlay that unifies the management of SD-WAN appliances from 10 different vendors. However, NTT declined to identify any of those SD-WAN technology partners. The NTT SD-WAN Services themselves tie into over 100 different internet service providers (ISPs) spanning 190 countries.

The primary issue Virtela is trying to address stems from a massive transformation that is starting to occur at the edge of corporate networks. Rather than backhaul all network traffic from the edge of the network to the data center, many IT organizations are starting to deploy SD-WANs that enable organizations to route traffic from the edge of network directly to a cloud application over a standard internet connection. In some cases, that SD-WAN is being used to replace a router. In other cases, it’s being deployed alongside an existing router. 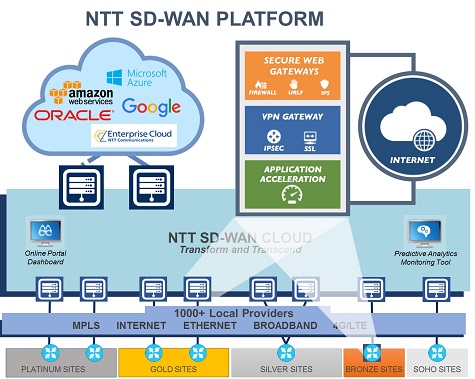 At the same time, SD-WAN appliances are rapidly expanding their footprint to include functions such as firewalls and WAN optimization. The challenge IT organizations face is that many of them will have a mix of appliances deployed in remote offices for the next several years as they transition to SD-WANs.

There may still be IT organizations that continue to prefer to implement and manage their own wide area networks. But as the complexity of the endeavor continues to rise in the SDN era, it’s a certainty that a lot more of them are going to opt to invoke SD-WAN services over rolling their own networks.