During the early 1990s, visitors to a trade show clicked on a hyperlink and used the Internet to connect to over 600 servers. It was called the World Wide Web and stunned the users with the simplicity of the operation and how easy it was to get information. Of course, today we can connect to more than 690 million servers, and the Web is woven into the very fabric of our lives. It was the dawn of a new era in technology.

Which of today’s technologies are now similarly positioned to revolutionize our work and interactions? Cloud computing is signaling that we are again at the dawn of a new era, and the network will drive the way we use the cloud in much the same way as the browser transformed the Internet.

Today the cloud is bound by the network. To truly realize the full potential of cloud computing, network connectivity must be as accessible and user-friendly as the Web made the Internet. In this slideshow, network specialists from Ciena take a closer look at the networking elements that are driving a new era of cloud computing. Click through as network specialists from Ciena take a closer look at networking elements that are driving a new era of cloud computing. Fiber capability helps eliminate the potential bottlenecks of bandwidth granularity and scalability. Since the 1980s, fiber deployment has grown from a few long-haul strands in North America to extensive metro, long distance, and undersea deployments. Sprint was one of the first telecommunication companies to move to fiber, constructing 10,000 miles in 1986 and adding 16-channel WDM systems in the early 1990s. Construction continues; 19 million miles of optical fiber were installed in 2011 in the United States. Worldwide fiber deployment is also growing significantly, connecting even private homes with more fiber or other high-speed, last-mile broadband technology. We can conclude that this fiber proliferation will likely eliminate any last mile connectivity problems. Today’s networks tend to get in the way of efficient information delivery. They can be notoriously frustrating because capacity is usually available only in static chunks, resulting in bandwidth either sized much higher than demand requires, creating inefficiency, or over-running at peak usage, resulting in outages or unavailability.

In the near future, this mismatch in supply and demand will be remedied by scalable systems that can take full advantage of the fiber. For example, Ciena has demonstrated the ability to successfully light 1970s-era experimental fiber laid by British Telecom (BT) with 100G wavelengths. More recently, Ciena’s WaveLogic 3 Coherent Optical Processors powered BT’s long-distance testing of 800 Gb/s super channel on its core fiber network. If today’s coherent optical technology can achieve this performance over 40-year-old fiber, and over fiber considered not good enough for 10 Gb/s, future generations should have no problem achieving scalability.

It is likely that the equivalent of Moore’s Law, which continues to drive exponential compute and storage advancements, will also occur with network speeds. In addition, the integration of packet with optical means network scalability for ethernet will keep pace with optical. If the industry has gone from 2.5G in 1993 to 400G and 800G in 2014, with 1Tb on the horizon, scalability to multiple-terabit networks will likely be common by 2034. Small and medium-sized businesses typically only have a few racks of equipment located in a small room or closet. These companies need a data center partner for backup and recovery, and increasingly utilize cloud resources for their variable workload requirements.

Consumers also drive the need for new data center designs. IDC calls it the “3rd Platform,” consisting of: cloud, social media, mobile broadband, and Big Data. Consumers expect on-demand access to video and other media flowing over the network from mega-sized data centers at Amazon, Microsoft, Google, and Facebook. This massive amount of content moves both to consumers and among data centers to balance workloads and reduce content delivery latency. The cloud network and user interface are two factors that will have to evolve with the cloud for easy use. Just as the Web browser unlocked the Internet, the cloud must become available through point-and-click network connectivity (or another equally simple interface). User-friendly interfaces, network programmability, and application awareness features not only provide easier access, but also facilitate software innovation. Software-defined networking (SDN) and common APIs such as Representational State Transfer (REST) and RESTful Web service are poised to provide the architecture for new, innovative network programmability in the same way standard HTTP Web interfaces and protocols unleashed unprecedented programming creativity in the past. In future cloud environments, the application workload will drive the required network capacity instead of today’s supply-and-demand mismatch. More than just raw bandwidth, additional service quality and performance options will exist for picking a time dimension, latency value, physical path, or simply the lowest-cost option. Much of the machine-to-machine traffic for content-to-content workflows will happen automatically as smart devices and systems negotiate for optimal efficiency or take high-priority pathways. 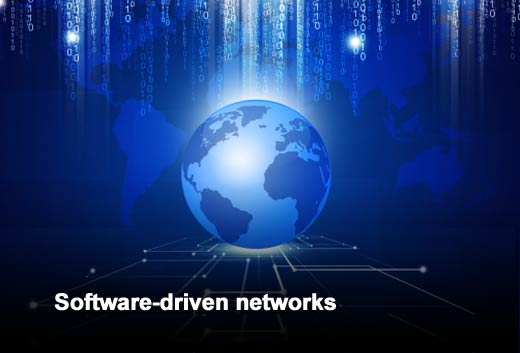 The on-demand network service is administered and controlled by policy. Different levels of resources can be assigned to users and groups to enable network segregation. This is equivalent to having the ability to assign rights to use the high-speed lane on the highway, and to charge for its use. The network should be able to compute price/performance options for the user, allowing the user or application to select the most efficient combination of cost, time, and performance for each workload requirement. Network services such as WAN optimization, encryption, and load balancing are becoming available as a virtual machine. Service virtualization and the NFV standard introduce a new world of possibilities for cloud networking, similar to today’s smartphone app ecosystem. Future deployments could enable the user or application software to select services as needed – on demand or from a catalog of possibilities – all running over the virtualized network infrastructure.

Much work still remains to define the interoperability standards and programming interfaces necessary for SDN. However, enough has already been accomplished to see the potential for software to leverage the fiber and network scalability to provide elasticity and extensive on-demand utility. The cloud for a new era

Users can experience the network impact now by ‘spinning up’ a server instance, allocating some storage capacity, or simply running a cloud application on the current network. Each user’s cloud experience will be as good as the network on which it runs. Most Internet connections simply lack the performance characteristics for cloud infrastructure workloads.

Once the initial experimentation has been performed, a user who engages the new breed of on-demand networking that provides scalability, programmability, and application awareness will notice a dramatic difference. The on-premises data center will now cooperate with the cloud data center almost as if there were no walls or distance between them.

By 2034, the software interfaces used today might seem crude by comparison as new, software-driven ‘ease of use’ seamlessly weaves the network and computing experiences together. However, today’s on-demand networks can transform current business and let organizations and users take full advantage of the cloud now.