Robots are far more than a buzz word. They are changing the way we work and live on a daily basis. These smart machines are driving a new era of manufacturing productivity, redefining technology markets, inspiring new business models and taking over more and more tasks now performed by humans. In short, robots are transforming our global economic future. In fact, the application of advanced robotics in health care, manufacturing and services could have an annual economic impact of between $1.7 trillion and $4.5 trillion worldwide within the next decade.

Increasingly, robotics innovation is offering companies a competitive business advantage and humans a better quality of life. Robotic hardware combined with cognitive intelligence and cloud computing capabilities signifies a host of new opportunities in advanced manufacturing, transportation logistics, surgery, retail and hospitality services, and even home and family care. It’s more than a fad, it’s a sea change: By 2025, the number of automatable tasks will increase to 25 percent across ALL market sectors. Robots stepping in to fulfill those tasks will boost productivity by 30 percent in many industries.

In this slideshow, RoboBusiness, the world’s must-attend robotics event, takes you on a tour of some of the robots transforming business as we know it and the trends you need to be tracking to stay ahead of the robotics curve. Don’t miss seeing these robots live at RoboBusiness, Sept. 23-24, in San Jose, California.

For more, be sure to sneak a peek into the future of robotics and business at RoboBusiness 2015. The Future of Robotics

Click through for a tour of some of the robots transforming business as we know it and the trends you need to be tracking to stay ahead of the robotic curve, as identified by by RoboBusiness. A higher level of robotization in factories means being less dependent on labor market fluctuations (whether the cost of labor or access to labor is a challenge). For that reason, the past several years have seen a trend toward reshoring manufacturing activities that were previously outsourced to lower labor cost regions. In addition, as robotic technologies mature, machines become easier to deploy and maintain, but also more agile and flexible, allowing a higher level of customization of goods produced. In fact, the need for large production facilities driven by economy of scale is being replaced by the need to produce as close as possible to the point of consumption: “Manufacturing anywhere” is becoming the norm. Close to gone are the days of huge, fixed robots operating behind cages in sprawling factories. A new breed of more compact, flexible and easy-to-program robots has made inroads fulfilling tasks in small to medium-size businesses around the world. These “collaborative robots” can not only be programmed quickly to perform different tasks and move or be moved around the facility, they are safe to work shoulder-to-shoulder with humans. Now they are joining the assembly lines at factories powered by Foxconn, Teradyne, BMW and more. Analysts and insiders predict that this fast-rising sector of collaborative robotics will attract more competitors and be the key to enabling true “lights out” manufacturing, which requires virtually no human intervention. Amazon’s purchase of Kiva Systems in 2012 was just the tip of the iceberg. Robots with autonomous mobility have changed the game in warehouse logistics when it comes to moving around materials. Now, however, steep competition has arisen among companies that offer not only mobility, but a robot with item retrieval capabilities. This brings the e-commerce industry one step closer to fully automated goods-to-person packaging. With the advent of package delivery by drone and the self-driving vehicle, the entire supply chain is headed for disruption through robotic optimization. Whether moving people, hard and soft goods, or raw materials, robotics will revolutionize how we think about transportation, as well as industries that rely on heavy, mobile machinery, like farming and mining. Already, companies including Caterpillar, John Deere, Uber and every automotive OEM worth their salt, have a self-driving strategy. By 2030, the self-driving car industry alone will become an $87 billion business opportunity with autonomous car sharing perhaps marking the beginning of humans riding, not only with other humans, but with packages scheduled for delivery. Meanwhile, fleets of self-driving trucks will transport goods from farm to table and from mine to factory at a never-ending pace. Still, the dawn of self-driving vehicles requires a complete re-think when it comes to safety, infrastructure, insurance and more, representing a huge opportunity for companies that can innovate to meet the demands of increasing autonomy. Robots Sold as a Service

The face of hospitality may soon be a robotic one, thanks to robotics innovators offering attentive and immediate customer service robots for enterprises such as hotels, restaurants and airports around the world. A far cry from the rigid manufacturing industry, these robots operate in unstructured environments and may be on call or not based on major ebbs and flows in clientele. This opens up the opportunity for robotics to utilize a business model first popularized by the IT industry: charging for the robots, not up front, but ongoing as services are rendered. The selling-as-a-service trend can be applied in numerous ways: based on data collected, the type of service rendered, or the number of times a task is performed. All this is signifying a change in the way robots are perceived and able to be used as a tool by businesses. Imagine walking into a hardware store looking for a certain brand of screw, and being led straight to it by a friendly robot worker that was not only able to recognize EXACTLY what you needed, but lead you to it and tell you everything about it along the way. The combination of robotic autonomy and business intelligence, correctly consolidated and leveraged, spells a major improvement in live customer support for professional retailers, not to mention less dependency on manual labor. The latest robotic innovations will not only provide a novel user experience by waiting on customers, they can stock shelves, deliver clothes to the dressing room, and monitor for security purposes, freeing humans up for more complex and creative tasks on the shop floor. A hospital’s primary focus is always on improving the quality of care for patients. That said, process automation is increasingly becoming a hallmark of efficiency and quality patient care in the competitive world of health care and medicine. Outside of the operating room, robotic pharmacists, autonomous mobile couriers and remote physician systems increasingly allow hospital staff to focus on patients and give patients access to more efficient and specialized care than otherwise possible. As more major facilities invest in new robotics technologies, it is essential for hospital administrators and robotics vendors to understand how these systems can integrate with existing process software and patient databases to provide additional intelligence along with delivering hardware-driven services. The age of the home robot is rapidly approaching with the world’s first “personal robot” companies bringing real products to market. Think Jibo, Future Robot and Softbank and Aldebaran. The convergence of these friendly, multi-tasking machines with cognitive and cloud-based intelligence will mark the crumbling of the final wall between humans and the pervasive acceptance of robots into our everyday lives. As with any new product delivered to consumers, personal robots offer an abundance of opportunities for telecom providers, apps developers and data-driven companies like Google to capitalize on the widespread adoption of these multi-functional (not to mention anthropomorphic) connected devices in the home. 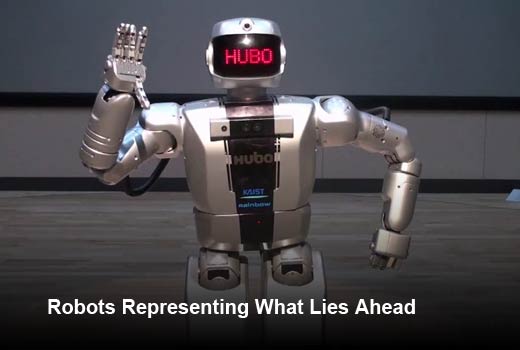 Robots Representing What Lies Ahead

Given the rate of advancement in technologies, and particularly in vision/facial recognition systems, sensors, new materials, networking and computing, the capabilities of the robotic systems of tomorrow are virtually endless. A world of cloud-connected robots capable of learning, responding, acting out and even rationalizing incoming information promises to forever change the way we live and work. The beginning of the robotic era is here now, and those companies that become part of the evolution today will have a leading edge on tomorrow.

Previous articleEmergency Response Plan
Next articleWhat’s Next After the EMV Migration? Tokenization