How Private Sector Best Practices Can Save Taxpayer Money

According to the Technology CEO Council, America’s growing national debt is undermining our global competitiveness. How we choose to confront and address this challenge will determine our future environment for growth and innovation. They suggest that by adopting commercially proven best practices to maximize operational productivity, the government can save over $1 trillion by 2020, while enhancing the services it provides citizens and laying a foundation for future innovation and growth.

This slideshow offers their list of seven specific initiatives where technology-enabled productivity solutions can make a material difference. 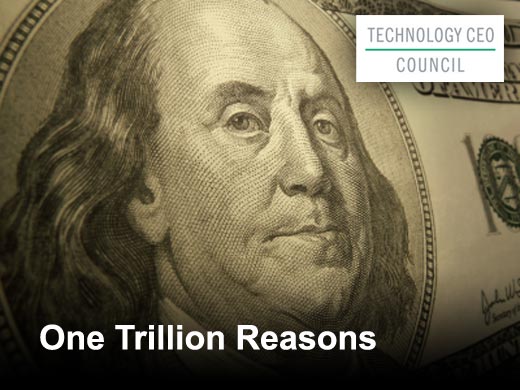 Click through for seven private sector best practices identified by the Technology CEO Council that could save taxpayer money. The government’s costs of operating information technology systems are higher than they need to be – in some cases by more than a factor of two. Significant savings can be realized if departments and agencies employ proven methods to reduce overall costs of IT ownership.

The federal government currently spends approximately $76 billion to support its widely dispersed IT assets. The Technology CEO Council estimates that at least 20 to 30 percent of that spending could be eliminated by reducing IT overhead, consolidating data centers, eliminating redundant networks and standardizing applications. The federal government buys approximately $550 billion worth of goods and services each year. These goods and services are procured largely within agencies and departments with independent procurement processes. In 2005, OMB announced the Federal Strategic Sourcing Initiative, with the intent of reducing procurement costs through the application of strategic sourcing initiatives. But the anticipated benefits have not been realized – primarily because budget and procurement processes have not been reformed. The effort also focused too intensively on commodity purchasing and not enough on supplier management.

Motorola integrated its disparate supply chains at the end of 2004, bringing the entities that support $40 billion in annual sales under one leadership team. By consolidating sites (from 25 to 17), reducing headcount, leveraging its aggregate procurement scale, increasing supplier accountability, and reducing poor quality, Motorola saved an estimated $1.2 billion annually. Similarly, the USPS cut its supply chain costs by 20 percent ($2.5 billion) through a supply chain transformation effort.

Cost savings estimate: More than $500 billion over the next 10 years. In November 2009, the President issued Executive Order 13514, which mandated that federal agencies cut their greenhouse gas emissions and energy/water use. One of the most effective means for reducing energy use is through facilities rationalization. The Technology CEO Council’s experience in call center consolidation suggests that organizations can reduce IT-related energy costs by 25 percent.

The federal government operated more than 1,100 data centers as of Fall 2009 (up from 432 in 1998), covering more than 7.9 million square feet and consuming more than 10 billion kilowatt-hours of energy each year. More broadly, the federal government uses 3.1 billion square feet of total office space. The implementation of new building management technologies can reduce its energy consumption. Advanced fleet management systems can reduce the size of the PC fleet and also reduce federal energy consumption by 10 to 20 percent. The aggressive adoption of voice, video, document sharing and collaboration tools can reduce travel-related expenses by 10 to 20 percent.

Cost savings estimate: $20 billion over the next 10 years. Additionally, four government cases studies from the UK suggest that 20 to 30 percent savings are achievable by moving to a shared services platform.

Cost savings estimate: $50 billion over the next 10 years. The administration already recognizes the magnitude of this issue. In Executive Order on Improper Payments (Nov 2009), the President states that “my Administration is expanding the use of ‘Payment Recapture Audits,’ which have proven to be effective mechanisms for detecting and recapturing payment errors. . . One approach that has worked effectively is using professional and specialized auditors on a contingency basis, with their compensation tied to the identification of misspent funds.”

The federal government issues nearly $3 trillion annually in payments in one form or another (e.g., federal grants, food stamps, Medicare payments, tax refunds). GAO estimates that $72 billion was lost to improper payments in fiscal year 2008 alone. OMB estimates the number was $98 billion in 2009 ($54 billion in Medicaid and Medicare).

OMB issued guidance this spring to departments asking that they develop plans to reduce these improper payments by $20 billion. Industry regularly conducts recovery audits of large-scale transactions; this could be fraud or mistakes, or an unanticipated shift in demand. According to the Technology CEO council, new analytical techniques can increase the identification rate to 40 percent.

Cost savings estimate: An incremental $200 billion over the next 10 years. Most departments have citizen-facing operations that rely on manual, paper-based business processes. By moving as many touch points as possible to electronic platforms and at the same time rationalizing the government’s field operations footprint, the government can reduce costs and improve the citizen’s experience.

In the U.S., there are more than 10,000 federal government forms in 173 different agencies that could be automated to allow citizens and businesses to conduct their business with government online. Reducing the citizen-related field operations of the federal government and automating the government’s form processing can generate $50 billion in savings over 10 years.

To further reduce the cost of field operations, we must mobilize the government workforce. OPM director John Berry reported that the federal government saved $30 million a day by teleworking during the February 2010 snow storms. The Telework Exchange estimates that, economy-wide, $441 billion in potential U.S. employer teleworker savings can be realized from reduced absenteeism, recruiting costs and increased productivity. The government has a large inventory of assets that could generate revenue. “Mining” the balance sheet through concessions agreements and other opportunities may generate significant revenues. This could include selling surplus facilities and selling and leasing back others. OMB has found 14,000 excess buildings and 55,000 underutilized buildings in the federal inventory.

The federal government has other assets – such as rights-of-way for energy transmission – that could be auctioned off. The federal government also has an array of fee-generating programs that do not recover their costs. Oftentimes, fee structures and levels are dictated by issues other than cost recovery. The Technology CEO Council suggests that the federal government identify agencies that can be statutorily dependent on the fee income they generate (i.e., no longer subject to the appropriation of general revenues).

Cost savings estimate: $150 billion over the next 10 years.