While there’s a lot of interest in all things related to software-defined networking, it may be years before the various standards bodies working on these technologies settle on an approach that is truly viable in the enterprise.

In the meantime, Enterasys, a unit of Siemens Enterprise Communications, is making the case that enterprise IT organizations should be able to take advantage of the benefits of SDN starting now. The company today unveiled One Fabric Connect Central, an implementation of an SDN that is based on the company’s Ethernet fabric architecture.

According to Ali Kafel, director of product marketing for Enterasys, it will be years before projects such as OpenFlow, Open Daylight and OpenStack can be deployed in combination to create an SDN. Rather than wait for those projects to mature, Enterasys intends to deliver all the capabilities of SDN today, which over time can then become compatible with any number of emerging network standards. 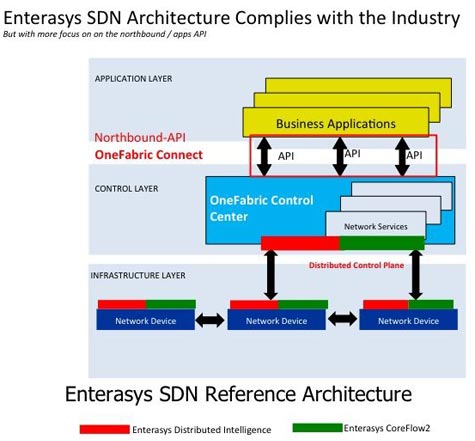 While open standards are important, Kafel says the most pressing issue is finding a way to allow network resources to dynamically scale. Huge advances have been made in terms of making server and storage resources programmable, but networking has lagged behind.

The Enterasys One Fabric Connect Central SDN not only features southbound application programming interfaces (APIs) to make lower-level networking resources programmable, Enterasys has documented a set of northbound APIs that third-party developers can use to build applications that invoke Enterasys SDN functionality in addition to creating a developer community called Connect Central.

It’s the existence of those APIs, coupled with proprietary ASIC processors, that provide visibility and control into thousands of network flows, which will ultimately differentiate Enterasys in the SDN space from rivals, says Kafel.

For all the promise of emerging standards in the networking space, a lot of IT organizations at this point simply can’t wait for SDN standards to evolve and mature. They need an approach they can implement today in a way that over time will evolve to support open standard technologies that, for the moment at least, still need more time to fully mature.

Previous articleMonster Survey Reveals Higher Demand for IT Pros
Next articleIn Smartphones, Tough Times for All but the Top Three