In need of a new router, Paul Mah used the opportunity to explore the various wireless solutions on the market, even as he hunted for a replacement.  He notes that while wireless technology offers a world of convenience, choosing the right hardware can make the difference between heightened productivity or frustration due to intermittent or poor performance. From his findings, he’s highlighted some tips that businesses should be aware of before deploying Wi-Fi networking in their organizations. Click through for eight tips for deploying Wi-Fi at work. 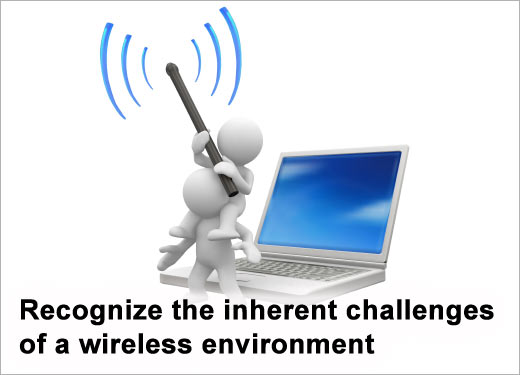 There is no doubt that Wi-Fi has entered the mainstream. Every laptop and netbook now comes with Wi-Fi, and we're not even counting tablet devices and an increasing number of smartphones. Compared to the single-digit count in most home deployments, though, the use of wireless in the office might not be as straightforward as one might think.

The usual disadvantage of interference to Wi-Fi signals applies to the office. And because neighboring offices also may be using Wi-Fi, as well as the correspondingly higher amount of data transferred during business hours, many of these problems are amplified. Moreover, a business wireless network is much more attractive to malicious attackers.

The bottom line is that setting up Wi-Fi in your SMB cannot be compared to the simplicity of a home wireless deployment. It can be much more complex and expensive for an optimum setup. IT managers should provision sufficient resources and not expect a plug-and-play experience. The popularity of Wi-Fi has meant a proliferation of wireless access points (AP) and routers available at extremely competitive prices. In fact, it is entirely possible to purchase three or four consumer APs for the cost of wiring up a dozen Ethernet ports. As you can imagine, management would be tempted to calculate the cost of deploying Wi-Fi using the typical home wireless router as a metric.

Seasoned network administrators will tell you that using network equipment designed and sold to home users is not generally a good idea for business. Usually undetected to the average user, Paul has seen consumer network equipment, including wireless APs, freeze, suffer from erratic performance or crash. He has had to reboot his wireless router, and has also seen bugs in network switches cause intermittent network slowdowns or other inexplicable problems.

Wireless APs designed for business are built to more stringent standards. Paul is not saying that problems cannot occur with business-grade networking gear, of course. He’s simply pointing out the value they offer. A site survey would probably be mandatory if your business office spans more than one level or has too many obstacles such as cabinets, cubicle partitions and concrete walls. The objective is to eliminate, or minimize, dead zones.

Putting the APs at the right location is extremely important because having too many in close proximity, ironically, can create more interference. Some enterprise-grade equipment, such as that made by Ruckus Wireless, is designed to not require a site survey.  This depends, however, on the advanced technology it employs, in which emitted wireless signals are essentially "shaped" and directed using software. While the Wi-Fi standard is the same, not all wireless access points (AP) offer the same performance.  As an example, the EnGenius AP that Paul Mah purchased to replace his Linksys wireless router blanketed his entire home with Wi-Fi — even in the roughly one-third that previously suffered from poor or non-existent coverage.

Traditional wisdom dictates that APs with external antennas tend to fare better. They do allow for the flexibility of swapping in a higher-gain antenna for better coverage.  Of course, the appearance of AP gear that supports beamforming technology, a signal-processing technique for directional signal transmission, is making the internal-vs.-external antenna debate a moot exercise.  For now, though, beamforming technology is generally found only on enterprise-level equipment. Power over Ethernet (PoE) is an increasingly important feature for APs deployed in the office. PoE support in essence allows for more flexible AP deployments, since the accessibility of power outlets can now be ignored. In addition, PoE eliminates the problem of AC adapters that burn out, while the availability of PoE injectors also eliminates the need to purchase expensive PoE network switches. Most consumer-level APs support only one SSID, or service set identifier. Support for more than one SSID is useful in several circumstances, such as to support the creation of additional SSIDs for guests or visiting business partners. While hardly foolproof, such segregation reduces the risk for your core SSID.

Most advanced APs come with support for multiple SSIDs, ranging from two to three or some times even as high as 16, and could come with additional capabilities for filtering or throttling the traffic on the different channels accordingly. Though not all client devices support 5GHz Wi-Fi operation, the ability to do so is certainly welcome. Support concurrently for 2.4GHz and 5GHz operation would be better. This allows for a more flexible deployment and almost certainly leads to better performance for Wi-Fi clients that transmit data using the 5GHz spectrum. Obviously, support for simultaneous 5GHz operation is useful only in regions where there is regulatory acceptance for its use. (Yes in the United States, no in China.) Suffice to say that any large-scale deployment would need to make use of more advanced forms of authentication beyond sharing the WEP or WPA passphrase. This could come in the form of a locally maintained database on the AP, support for 802.1X authentication, RADIUS, LDAP or Active Directory.