5G: It’s About the Use Cases

No need to worry yet about 5G. After all, LTE is not yet fully deployed. Innovations, such as Voice over LTE (VoLTE), are just emerging. In many cases, LTE is providing more bandwidth than people are using. The bottom line, therefore, is to take it slow.

This sounds like a reasonable line of thinking. The only problem with it is that it is wrong.

While it is true that 5G won’t be commercially available until 2021 or 2022, it is important to pay attention to its development now. The heavy lifting in standards bodies, consortiums, think tanks, corporate labs and elsewhere is well under way. Work is ongoing on important early questions on both the high and granular levels. Organizations that want to have a horse in the race need to saddle up. Those that don’t run the risk of being left at the starting gate. 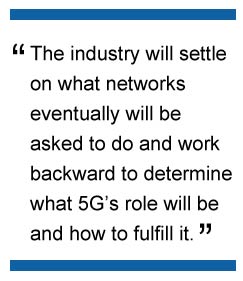 Once the need to act is accepted, another realization must be made. A key difference between the 5G evolution and those that came before simply is that society has changed. Cellular is no longer a discrete network, separate from Wi-Fi and wired networks. Indeed, 5G will be an element of an increasingly ubiquitous global infrastructure. “We are seeing a convergence to improve the air interface as well as the networking technology,” said Sundeep Rangan, an associate professor of Electrical Engineering at New York University and associate director of NYU Wireless, an academic research center headquartered at the school’s Brooklyn campus.

It’s About the Use Cases

The industry recognizes this reality and is approaching things in a way that figures to be a bit neater – that’s relatively speaking – by focusing on practical use cases, not pure technology.

“This time around, it is about a framework on how to grow your business, a framework for business modules,” said Carl Piva, the vice president of Strategic Programs at the TM Forum. “On the back end of those use cases we will infer what the requirements are. Previously, it was more about just getting the technology out and hoping the market thought it was worthwhile.”

The goal, in essence, is to cut to the chase more effectively. Examples of the 5G use cases, Piva said, are sensor networks, pervasive networks, tactile networks, eHealth and disaster relief. In other words, the industry will settle on what networks eventually will be asked to do and work backward to determine what 5G’s role will be and how to fulfill it.

The use cases will require a set of diverse capabilities. The idea is that not all of them will be required for each potential use. For instance, sensor networks require long battery life, but don’t need high data rates. Networks optimized for disaster relief must accommodate huge and unexpected spikes in usage.

An important related goal is to find ways to support multiple use cases simultaneously. This may be done by segregating bandwidth and/or using more than one modulation scheme and waveform, said Phil Solis, the research director of ABI Research.

The basic 5G toolbox is coming into focus. Rangan said that the early line on 5G requirements includes data rates that can reach 1,000 times those of LTE, much lower delay, and power draws that enable batteries life to reach 10 years.

5G will use channels that are 100 Megahertz or wider located in the centimeter or millimeter wavelength spectral regions, Solis said. Making this happen will require some development work, however. Use of such high frequencies is not viable today. Though it is changing – mainly due to work in the Wi-Fi sector – the cellular model still broadcasts its signals into sectors as wide as 120 degrees, or one-third of the total 360-degree circumference of an antenna’s potential range.

That won’t work in the millimeter or centimeter realm. If broadcast into such a wide sector, the characteristics of these high-frequency signals would make them essentially unusable. For this reason, precise targeting using Massive multiple in multiple out (Massive MIMO) and 3D beamforming will be required.

No Killer App – and That’s a Good Thing

The shrewdness of predicating 5G development on use cases is that it will blunt the need to push a “killer app” that may not get buy-in from those who must make huge investments to bring 5G to reality. What the industry has learned is that higher capacity networks will be used – but what they will be used for can’t be known in advance.

Thus, the idea of pushing 5G as a landscape in which conditions are created where a universe of as-yet-undefined services can be established and flourish puts less pressure on the industry.

“Historically, if you look back at 4G when it started to develop in 2005, it found enormous uses not predicted at the time,” Rangan said. “I suspect that something like that will happen again.”

Things are getting rolling in earnest, according to Solis, and it is important to keep tabs on what is going on. “It is going to be even more competitive…Now companies are forming different alliances, hedging bets,” he said. “They are starting to work out what are the technologies’ pros and cons.”