Loudon Blair, senior technology director, Network Architecture, Office of the CTO, Ciena, believes that in 2016, we will continue to see fundamental changes to the way networks are designed, architected and provisioned in order to meet the growing bandwidth requirements of today’s web-scale world. The web-scale dynamics currently impacting the network include the Internet of Things (IoT), cloud and virtualization, HD video and mobility. As organizations get more comfortable with these changes, we’ll see them make adjustments based on lessons learned.

In this slideshow, Blair outlines networking trends that we can expect to start seeing in 2016. Click through for networking trends expected to develop in 2016, as identified by Loudon Blair, senior technology director, Network Architecture, Office of the CTO, Ciena. Software Will Take a Bigger Role

While it is clear that network virtualization, SDN and NFV will significantly improve the way networks operate, and some progress has been made, there is still a way to go before the ideal of a fully open software control layer with commoditized hardware can be achieved. As such, in 2016 service providers will get pragmatic as they seek to use orchestration, as a complement to SDN/NFV, to more quickly manage and provision across multiple domains and across a mix of physical and virtual networking devices. Orchestration will ultimately allow service providers to step toward more virtualized, on-demand networks. Today’s Cloud Isn’t Right for Everything

With 4K/Ultra-HD video poised for growth and the use of IoT devices on the rise, service providers are realizing that the current method of hosting services in the cloud may not be the most economical or efficient way to facilitate service delivery. For example, streaming 4K content over existing data links will present issues with caching that have OTT providers investigating how to bring caching closer to the edge of the network. In the coming year, we’ll start to see early innovation around the development of the “cloudlet” – a mobility enhanced, small-scale data center that lives on the edge of the network. This will give rise to a “gas station” model of moving compute and store functionality closer to the end user. This cloudlet could live in a literal gas station, a central office (much like a cable head-end), the base of a mobile cell tower, or in the home or office. 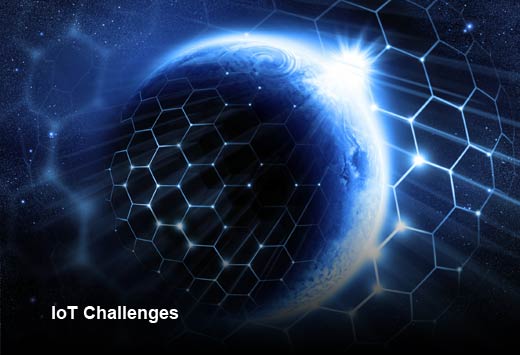 When it comes to IoT, bandwidth is NOT the ultimate challenge.

There is so much talk about how many things we’re going to need to manage – whether 25 billion or 38 billion by 2020, the fact is much of the data transmitted by IoT devices will not take up much bandwidth. The bigger challenge for network operators will be to securely address the scale and control requirements of managing the sheer number of endpoints, and it will require more than one approach. We expect to see much research and innovation in this sector. In the submarine market, more than 50 percent of the data traversing both Trans-Atlantic and Trans-Pacific networks will be driven by Internet Content Providers (ICPs), with video and cloud services taking up a significant portion of the bandwidth. To support this, well-known ICPs will make bigger investments in established submarine cables, and will construct more private networks. Castle-Style Security Will No Longer Suffice

Today’s multi-layered approach to security has room for improvement. Much like a castle is protected by a moat, and then walls, and then rooms to protect rulers and their riches, enterprises leverage firewalls, intrusion detection and prevention, identity and access management, unified threat management, and other tactics to protect user data. But what about the armies of men out in the field? How can they be protected? In 2016, we’ll see network and security decision makers take bolder steps to address data security while it’s in-transit, and at the optical layer, arming organizations with a truly holistic defense for data at-rest and in-transit. With advanced optical encryption techniques, enterprises and service providers alike can add an extra layer of security for data traveling across all networks, from point A to B. Service providers will begin planning for a submarine capacity shortfall.

Submarine networks that transmit 99 percent of the world’s global Internet traffic are currently operating at 20 percent capacity, yet in just four years, with the volume of data traversing the networks growing at 40 percent year-over-year, this critical Internet infrastructure will be at maximum capacity. To support this growth rate, service providers will need to make significant investments in the development of not only new cables, but in the specialty ships and specialist crew to lay the fiber. There will be much talk about who will fund this, and how. Due to the long lead-time required to build a submarine cable (about two years), the conversations about how these new cables will become a reality will need to start soon.