What BlackBerry 10 Means for the Enterprise

It was not long ago that the word “smartphone” was synonymous with BlackBerry, especially in the enterprise market. Needless to say, the world changed with the introduction of the iPhone in 2007 and, in fact, neither the enterprise nor consumer smartphone markets have stopped evolving since.

In that time, companies such as Apple and Google have turned the enterprise world on its head by showing users innovative features and functionalities that they didn’t even know they wanted. Ultimately, enterprise users began to demand that their organizations either provided or enabled iPhones and Androids with enterprise applications in order to perform their jobs. The result? Organizations have since given into the demand and are now increasingly looking for methods to secure and manage the plethora of devices that need to be supported. Thus the era of BYOD.

While many have questioned BlackBerry’s ability to compete in this new market, many now see the launch of BlackBerry 10 (BB 10) as a second chance for the company to capture back its enterprise users as well as keep its current users from defecting. After all, the core of BlackBerry’s 80 million users has always been in the enterprise market. With the release of BB 10, the company is making its biggest and most significant push to date in providing a mobile experience that caters to both the enterprise and the consumer markets. Whether this launch will serve to be a game changer remains to be seen; however, there are plenty of reasons to believe that BB 10 will have a positive impact in the enterprise space. According to Dipesh Mukerji, senior director of product strategy & marketing, Kony Solutions, BlackBerry 10 will affect enterprise mobility in the following ways. 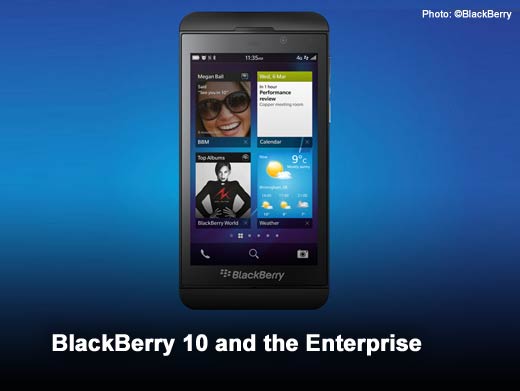 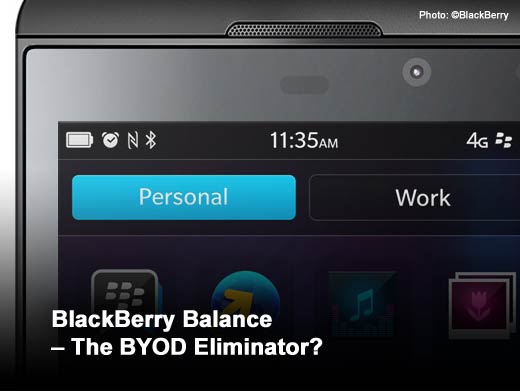 With the release of BB 10, BlackBerry can now say that it has created a device with a user experience that rivals that of any smartphone on the market. For example, with “BlackBerry Balance,” users can partition their personal and professional applications, thus essentially creating two separate devices on the same phone. Why is this so significant? With both a work profile and a personal profile, users can manage both sides of their life (work and personal) without sacrificing any security or privacy. This feature alone is argument enough for IT administrators to throw BYOD out the door and return to the days when BlackBerry ruled the enterprise. 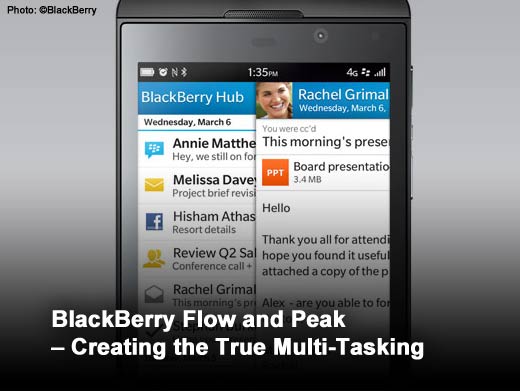 The one thing all enterprise users need is the ability to perform a multitude of tasks at the same time. BlackBerry has tackled this challenge with the launch of “BlackBerry Flow & Peek” and “BlackBerry Hub,” which allow enterprise users to be productive on up to eight apps at the same time. How does it work? Users can easily swipe between the apps, as well as any notifications from other apps without having to revisit the home screen or close anything. Essentially, the enterprise user can now seamlessly update their CRM and ERP systems, answer emails, take photos of receipts, enter time and expenses, update a calendar appointment and text friends all without having to close any apps. The end result is a clear convergence of the enterprise and consumer user experience and an increase in user productivity. BlackBerry has always rested its hat on security and management for enterprise users. With the release of BB 10 also comes the release of BlackBerry Enterprise Server (BES) 10 and Mobile Fusion. In order to confront today’s mobile management challenges, these new features will aim to empower IT admins to securely manage and deploy any smartphone device. This is a highly welcomed capability by IT administrators longing to control all devices that they support. Now, admins can securely and effectively manage all mobile devices (even if the enterprise user decides to not go with a BB 10 device), which translates into increased efficiency and cost reduction for IT budgets. Although the idea of having an enterprise app store is not new, the fact that BlackBerry has incorporated an app store into its new offerings makes the package deal of BB 10 (devices, management and distribution) even more appealing as a potential one-stop shop for all mobile needs. How does it work? The BlackBerry 10 Enterprise App Store will allow IT administrators to determine exactly what apps their enterprise users can download. Moreover, admins can receive apps made by developers and place them behind the firewall and within the organization’s own enterprise app store, enabling the admin to serve as the middleman for app distribution. With this functionality, BlackBerry is staying loyal to CIOs and IT administrators by giving them full control and management of device apps. 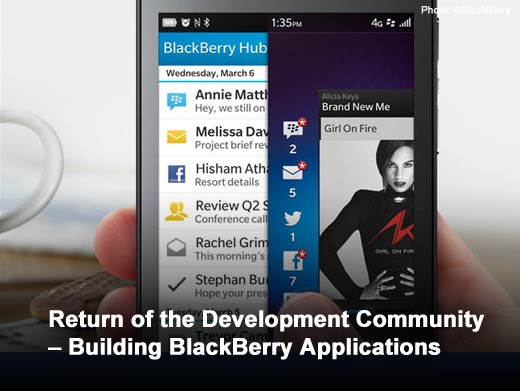 Mukerji believes that a company is only as good as the selection of apps it provides. With BlackBerry 10, the company has taken major strides to facilitate a good experience for developers building mobile applications for the platform. This is another area where the convergence of enterprise and consumer markets is clear, as all users want to be able to perform a multitude of activities with their mobile devices. For example, an enterprise user may want to have their internal CRM app but also an app for Bank of America to perform personal banking on the go. This assortment and selection of apps is what all users desire.  Therefore, BlackBerry has built its development community to continuously build apps and grow its selection not only for popular consumer apps such as New York Times, Wall Street Journal, Facebook and Twitter, but also for enterprise apps such as Oracle and IBM. BlackBerry has even created events dedicated to developers to build apps for the enterprise called “BlackBerry Jam Enterprise Edition.”