Apple made a big splash with the recent announcement of its innovative, new products launching Fall 2015. Included in the latest generation of Apple products are the new Apple Watch, the iPad Pro, Apple TV, and the all-new iPhone 6 S and iPhone 6 S Plus.

The iPhone 6 and iPad will ship with Apple’s iOS 9 operating system, which offers new multitasking features that help make you even more productive. Siri has been updated and can now offer proactive suggestions to help you get things done before you ask. Additional improvements have been made to enhance overall performance, battery life and security.

Additionally, iOS 9 will come with a variety of built-in apps designed to help with everyday tasks, including mail, messages, web browsing, maps, notes, news and more. iCloud Drive is also now built into iOS 9, allowing you to access any file you save on iCloud from any device. The Next Generation of Apple

Click through for more on the latest products from Apple, debuting Fall 2015. Apple Watches will be shipping with new models, face designs and apps that can provide the latest news, notifications, daily activity tracking, music and payment options. Additionally, users will be able to access iTranslate to get translations for 90 different languages, check on transit updates, and communicate via Facebook Messenger. The Apple Watch will also have a new time travel capability – just rotate the dial to see upcoming appointments. There are currently over 10,000 watch apps in the app store. Watch OS 2 will be available Sept 16. 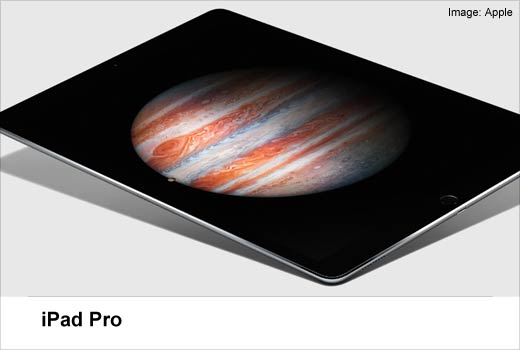 The new iPad Pro has the largest screen any iOS device has seen to date, but weighs only a fraction more than previous iPad devices. The 12.9-inch diagonal Retina display (2732 x 2048 px) is able to support a full-size on-screen keyboard and an image depth of 5.6 million pixels.

The tablet includes the new A9X chip, a third-generation 64-bit chip that provides two times the memory bandwidth of A8X and two times faster storage performance. It has an average battery life of about 10 hours, but comes with a new variable refresh rate to help save battery life. The refresh rate will respond to on-screen action, slowing to save energy when things aren’t moving so quickly. Looking to compete with the growing popularity of Microsoft’s Surface Pro 3 two-in-one device, Apple has developed a Smart Keyboard for use with the iPad Pro. When not in use, it can be folded and used as a slim, lightweight cover for the device. In addition to the keyboard, Apple is introducing an Apple Pencil that will allow greater precision over the multi-touch display. The pencil allows you to add notes within apps, draw lines, and add shading with a tilt of the hand.

The speaker system has also been improved on the iPad Pro. The new device sports four high-fidelity speakers built directly into its unibody, and provides three times the output of the iPad Air. Sound automatically adjusts the orientation of sound according to how you’re holding the device.

On the security front, the iPad Pro will use Touch ID technology to turn your fingerprint into an unforgettable password. Touch ID also lets you make secure purchases in iTunes, iBooks and the App Store. According to Apple, the future of television is all about the apps. With HBO NOW, WatchESPN, Netflix, Hulu and iTunes, apps are quickly becoming how we watch television today. Using a new operating system called tvOS, the new Apple TV connects your screen and Siri for an innovative new way to watch your favorite shows. The App Store will be available through Apple TV, providing access to all sorts of games and new user experiences. Additionally, the new Siri remote gives you the power to tell your TV exactly what you want to watch, taking the work out of finding the programming. Having begun the multi-touch phenomenon with the first iPhone, Apple takes the next step in innovation by introducing 3D Touch. Along with recognizing familiar gestures, such as swipe, pinch, etc., the iPhone 6 S series will also recognize force, enabling new gestures, including peek and pop.

A light press will give you a peek at the content you’re interested in; continue pressing and it pops you directly into the content itself. While peeking, you can flick up for more action options, flick right for common actions like marking an email as read, or flick to the left to delete it. Third-party developers are also taking advantage of 3D Touch by providing actionable options without having to even open the app. The new iPhones will come in four metal finishes (rose gold, space gray, silver, and gold) and are made of a new alloy of 7000 Series aluminum – the same grade used in the aerospace industry. The phone sports a 12MP iSight camera and will take 4k video (four times the resolution of 1080p HD video). It also has a 5MP FaceTime HD camera for selfies.

Just like the iPad Pro, the iPhone 6 S comes with a custom-designed 64-bit A9 chip that provides up to 70 percent faster CPU performance and up to 90 percent faster GPU performance for all your favorite graphic-intense games and apps. The phone will also include Touch ID, making it easy to unlock and use your phone in a secure manner.

The phone is expected to ship September 25.

Previous articleBlackBerry and Good Technology Merger: The Big Advantage
Next articleApple Attempts to Get Cozy with Enterprise