One of the next big things, wearable computers, actually has been with us for quite some time. It is only with the coming of Google Glass and the rumored wearable glasses from Apple that this slow revolution has achieved a high profile.

ABI Research predicted that wearable computers will “explode in popularity” during the next five years, and the expectation is that 485 million devices will be sold annually by 2018.

Here is a look in the latest in wearable computing. Some of the devices are available, some are expected soon, such as smart watches from Apple and Samsung, and some are in development. 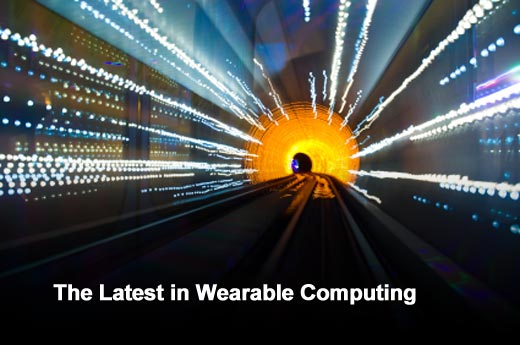 Click through for nine of the latest wearable computers. Two categories that will lead the wearable computing sector, at least in volume, are eyewear and watches. Google Glass is the major breakthrough in the glasses department, though Apple is rumored to be developing its own line. The Pebble watch downloads apps and connects to Android or iPhone smartphones via Bluetooth. The Sony SmartWatch Android-based device offers a choice of watch faces, vibrates when calls come in and supports multiple applications. The watch acts as a remote device for the Android-based smartphone. The Neptune Pine is a smart watch that can send and receive voice calls, browse the Web, check email and perform other functions usually done by smartphones. Thalmic Labs’ Gesture Control Armband is worn on the forearm. It senses electrical activity in the muscles and thus enables users to interact with electronic devices using just their fingers and hands. The MOTOACTV is a wearable apparatus for athletes that tracks heart rate, cadence and other parameters. Accessories can provide GPS and other functions. The nascent field of e-textiles enables sensors in the form of fabrics to be woven into clothing. They can do such things as predict motion and sense bodily and environmental changes. In the future, wearable garments will be prevalent. You will be able to wash them, though it may be a good idea to go light on the ironing. Research is ongoing in many places, including the Textiles Research Group of Nottingham Trent University in the UK.