Ten Productivity Gadgets to Prepare for the New Year

The year is drawing to a close, and you are getting ready to wrap things up for the holidays. You want to get things set up so that you can hit the ground running come the New Year, though. To help you along, we have put together a bunch of great gadgets that will surely boost your productivity. 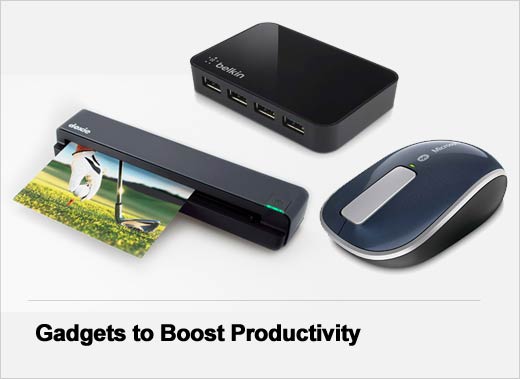 Click through for 10 gadgets that will help you hit the ground running in the new year. At 10 times faster than USB 2.0, USB 3.0 is excellent for data transfers from external storage drives or USB flash drives. Unfortunately, many laptops and PCs still don’t offer as many USB 3.0 ports as we would like, forcing users to compromise. As its name suggests, the Belkin SuperSpeed USB 3.0 4-Port Hub plugs into an existing USB 3.0 port to increase the number of USB 3.0 ports that are available. While not all devices can run at the full speed simultaneously, having the hub around certainly eliminates the hassle of insufficient USB ports. The Doxie One is a scanner designed to scan all your paper, photos and receipts without the need for a computer. Its compact form factor allows the scanner to be stowed away in a drawer, and setup is quick: You just plug it into a wall socket. Unlike a bulky traditional flatbed scanner, an automatic feeder starts automatically and pulls the sheet through in seconds. Captured images are saved on an included SD memory card, much like in a digital camera. This can then be loaded onto a Mac or PC through a standard flash memory card reader, or to an iPad tablet with Apple’s iPad SD Card Reader. The Google Chromecast is a media streamer that plugs into any HDTV with an HDMI port. Similar to the Apple TV, the Chromecast connects to a Wi-Fi network for wireless streaming. At just $35, the Chromecast is both easy to set up and inexpensive. To be clear, support for the Chromecast must be specifically built into apps, though this shouldn’t be an issue as Google has already released the API for the device. For now, various apps are available on Android and iOS devices, as well as Windows and OS X. The IDAPT i4 is an innovative universal charger designed to charge up to four mobile devices simultaneously. This docking station comes with three receptacles that accept various charging tips ranging from mini USB, micro USB, Lightning, the old Apple Universal Dock, and other tips for various digital cameras and even rechargeable AA or AAA batteries. A separate USB port offers the ability to plug in a standard USB cable for charging tablets or other devices that may be heavy or bulky. Several common tips are provided in the package, and additional tips can be purchased directly from IDAPT and range from $10 to $20 each. The Ergotron LX Desk Mount LCD Arm sets the gold standard for monitor arms on the desktop. Perfect for both single monitor users and those who use multiple monitors on their desktop, the Ergotron monitor arm offers unparalleled flexibility in the positioning of your LCD monitors. Moreover, it frees up space on the desktop as it mounts onto the edge of the desk, and can be pushed out of the way. Ergotron says its arms are tested to 10 times the expected lifecycle of other competitive brands, and monitors can be quickly positioned up, down, left, right, forward, backward or even rotated with a mere touch. The Kensington AbsolutePower Laptop, Phone, Tablet Charger is a highly versatile laptop charger that delivers up to 100 watts of power to charge your laptop, as well as two separate USB devices – simultaneously. The Kensington AbsolutePower serves as an excellent second charger for laptop users, and its compact form factor means that it is one of the most powerful charger in its class. The default package comes with interchangeable power tips that are compatible with top laptops from brands such as HP, Dell, Acer, Toshiba, Lenovo, Samsung, Sony, Gateway and Asus. The two USB ports also offer 2.1 Amp capability for charging the latest smartphones and tablets. The Logitech Wireless Solar Keyboard K760 is a full-sized keyboard that never needs to be recharged or have its batteries replaced. The light-powered keyboard incorporates a solar panel that charges itself with lamplight or sunlight. Bluetooth technology allows it to work wirelessly from up to 30 feet away. In addition, built-in “Easy-Switch” technology allows the keyboard to be paired with up to three devices, allowing users to switch between Bluetooth devices within seconds by hitting the shortcut key. The Logitech Bluetooth Speakers Z600 are an eye-catching pair of wireless speakers that come with a great-looking fabric finish. Despite its relatively small size, the Z600 is capable of delivering room-filling sound through the three discrete drivers found in each speaker. To adjust the volume, simply run a finger along the touch control located on the top panel of the right speaker. The Z600 pairs with up to three devices via Bluetooth at the same time, though an included USB transceiver allows the speaker to work with non-Bluetooth devices, too. 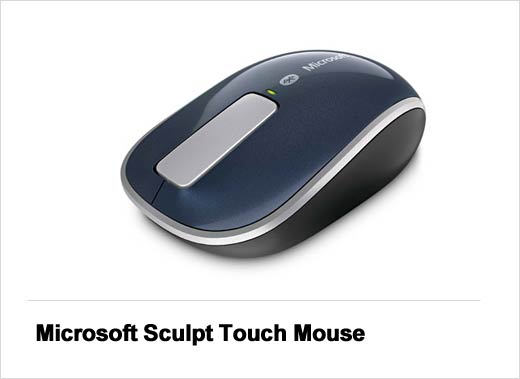 Looking for a portable mouse that helps you get things done? The Microsoft Sculpt Touch Mouse is a wireless Bluetooth mouse equipped with BlueTrack technology that allows it to track well on virtually every type of surface. A four-way touch strip on the mouse offers the ability to easily swipe up and down, left and right, with just the swipe of a finger – it also offers tactile feedback by vibrating the touch strip gently. Finally, the Sculpt Touch Mouse has side grips that are easy to hold, while Microsoft’s legendary contoured shape allows comfortable use in either hand.