Among the top findings: Many smartphone users are more concerned about mobile privacy than a phone’s brand, screen size, weight or camera resolution; nearly eight in 10 smartphone users won’t download an app they don’t trust; and although the majority of those surveyed don’t like the concept of tracking, nearly a third of smartphone users are still unaware it even happens.

“With mobile privacy concerns running hotter than ever, the business implications simply can’t be ignored,” said Chris Babel, CEO for TRUSTe. “If a user won’t download an app or share location data, mobile commerce – and technology innovation – takes a hit. To secure their future growth, companies must address mobile privacy concerns now – giving users what they’re asking for with more transparency and control over their privacy choices.” Click through for findings from a mobile privacy survey conducted by Harris Interactive on behalf of TRUSTe. Privacy is the primary concern for 22 percent of smartphone users when using mobile apps, second only to battery life at 46 percent – but more than two times other phone attributes, like brand (9 percent) or screen size (9 percent). Sixty-three percent of mobile users are frequently or always concerned about privacy when banking online, the online activity causing mobile users the greatest concern, followed by shopping online (60 percent).

Seventy-eight percent of smartphone users surveyed won’t download an app they don’t trust (down from 85 percent in 2012). Yet, regarding the type of data smartphone users are willing to share, the study found that the vast majority of users will NOT share: contact information (99 percent), precise location data (89 percent), or Web surfing behavior (88 percent). While consumers are more aware about mobile behavioral advertising than a year ago, awareness is still relatively low and, regardless of awareness, the majority of those surveyed do not like tracking. Specifically: 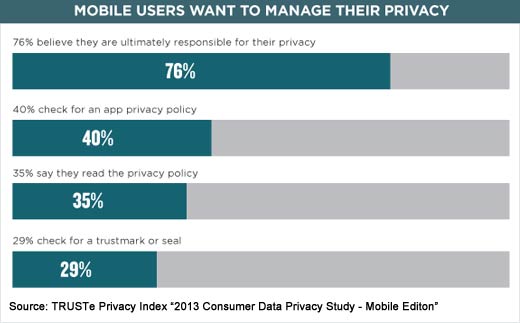 Seventy-six percent of those surveyed responded that they are ultimately responsible for protecting their own privacy. In addition, 40 percent of smartphone users surveyed said they check to make sure whether a mobile app has a privacy policy, and nearly three in 10 check to see if the app has a privacy trustmark or seal. Additionally, 39 percent research apps online and 26 percent check with friends before sharing personal information.

Previous articleFive Reasons Why You Shouldn’t Move Your Data
Next articleHow Tech Will Change Training for Attorneys, Physicians