Microsoft has done a number of awesome things during the past three decades. Perhaps its greatest feat, in terms of beating the odds, would be to make Windows Phone 7 a success.

That is not to suggest that the new operating system, which has landed on the desks of influential reviewers during the past few weeks, is not worthy. Indeed, the initial reactions, on the whole, are positive. The negatives cited by reviewers seem to be fixable rather than fundamental.

Yet Windows Phone 7 will fight for market share in a landscape crowded to overflowing with great operating systems, terrific marketers and aggressive developers. Moreover, it seems unlikely that it will get the benefit of the doubt from the mobile community. "In my eyes, it’s kind of a long shot," said Allen Nogee, an analyst for In-Stat.

Interviews with observers suggest that there are a number of significant issues that will make life difficult for Windows Phone 7. 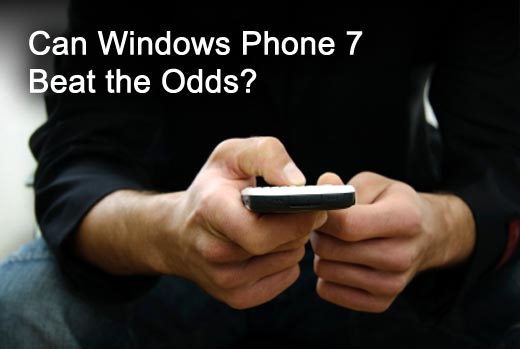 Click through for issues Microsoft must work through to give Windows Phone 7 a fighting chance. One of the key advantages Microsoft’s mobile initiatives have long brought to the table is that its desktop productivity tools are virtually ubiquitous. That still is true, but viable alternatives have emerged during the past few years. Microsoft still is a big fish, but it is no longer the only fish. "The reliance on Outlook Word and Excel have lessened," Nogee said. "Many of the core users they can go after have started to find [other] solutions that work for them in mobile." Michael Morgan, senior analyst for mobile devices for ABI Research, said that the model in which the OS owner can exert total control over the handset vendor no longer is viable. "I think there is a little bit of legacy thinking," Morgan said. "A few years ago…the model was that you license from us and we take over the software strategy, etc. Now the OEMs are trying to bring to market their own strategy. Theirs, not Microsoft’s."

Morgan outlined several structures for smartphone creation. Apple and Research in Motion, for instance, both own their respective OSes and build devices. Android, of course, is an open source OS used by a growing roster of handset makers. Morgan’s take is that Microsoft’s approach, which is to license the OS to device makers while retaining tight control over how it is used, is antiquated. 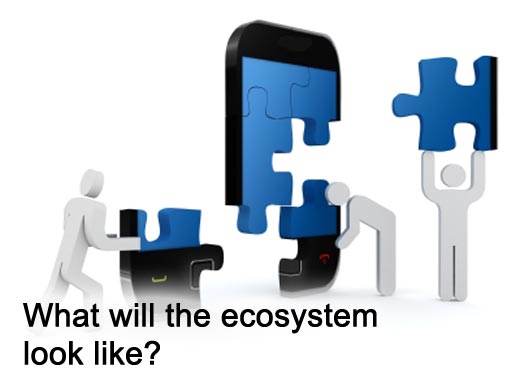 As tricky as inking deals with handset vendors might be, it is only one part of the job. More broadly, Microsoft must create a "super ecosystem" said Peter Farago, vice president of marketing for Flurry, a company that tracks mobile applications.

Farago said that the "super ecosystem" consists of the operating system, the device, an online store or marketplace, a broad collection of applications and a seamlessly accessed source of mobile broadband connectivity. Microsoft’s approach of licensing the OS and relying on other parties for everything else is not optimal for the current environment, he said. Microsoft also is dealing with the transition of a mobile world that was definitively divided between consumer and business users to one in which the distinctions are far less clear. Philippe Winthrop, managing director for the Enterprise Mobility Foundation, said that now the focus is on the user, regardless if he or she is at work or enmeshed in consumer activities.

The question is whether Microsoft, whose greatest mobile strength is in a traditional corporate environment, can pivot to focus more centrally on the end user, no matter what the device is used for. "Perhaps by having a user-centric vision, Microsoft may ultimately be able to find a middle ground," Winthrop said. Related to this is the question of whether Microsoft can effectively knit its assets together. "The big ‘if’ question is if Microsoft can integrate in a compelling fashion its myriad assets," said Winthrop. "whether it Exchange, SharePoint, Hotmail, Xbox Live or it’s cloud computing with Windows Azure, if they can successfully integrate all these different components into a compelling user experience, than, yes, they can absolutely get into the game." Windows Phone 7 is a new operating system, not an update of previous Microsoft mobile platforms. That raises the issue of motivation for corporate users to do the heavy lifting to rework what they have in place. Once corporate users of previous Windows Mobile platforms realize that moving to Windows Phone 7 is a significant change, they might consider the iPhone, Android or other more established smartphone platforms. "They have to convince their existing customer base to migrate their apps to the new platform," Gold said. "That may be a tough sell to many companies." Jack Gold, the principal of J. Gold Associates, wonders whether enterprises might be a bit reticent due to the short life of the Kin. "It didn’t do well, so they cut their losses and ran, which was the right thing to do," Gold said. "But will they do the same with Windows Phone 7? Can they guarantee [enterprises] that it will be around or will Microsoft just roll up the tent if it doesn’t sell well?"