IT organizations today are often confronted with having to support three devices per user thanks to the rise in popularity of tablets. The challenge they face is that traditional PCs aren’t necessarily going away. They are still the primary device used to create content. It’s not uncommon for a user to have a smartphone, tablet and a traditional PC.

Microsoft, of course, has lead the charge to reduce the need for a separate tablet device via the introduction of a 2-in-1 category of PCs, most notably in the form of Microsoft Surface systems. At the Mobile World Congress (MWC) 2017 conference this week, Samsung signaled its intentions to directly challenge Microsoft with the launch of 2-in-1 PCs that can run Windows 10 or the Google Android operating system.

Although Samsung has not put a price on either a 10.6-in or 12-in Galaxy Book offering that runs Windows 10, or a Galaxy Tab S3 that runs Android, Samsung has committed to including the keyboard with the systems versus charging extra.

In addition, Samsung says the Galaxy Book makes use of the latest generation of Intel processors to provide a 2-in-1 device that weighs less than a Surface machine. The 12-in Galaxy Book also includes Samsung Flow software that is designed to make it simpler to share data and files between Samsung smartphones and PCs.

Samsung is hardly the first PC manufacturer to challenge Microsoft with a rival 2-in-1 design and it remains to be seen what the actual cost of these Samsung devices will be. But Kevin Gilroy, executive vice president and head of Samsung Business, says given the size of the demand for 2-in-1 PCs, there’s plenty of room for both Samsung and Microsoft.

“There are plenty of desktop PCs out there that people want to replace,” says Gilroy. 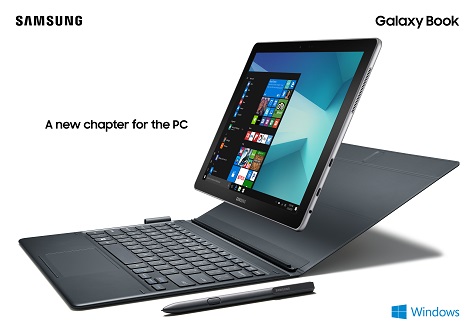 Driving that transition, says Gilroy, is a need to modernize a broad range of business processes that almost always starts with a mobile device.

PC vendors have been struggling to adjust to the popularity of tablets, with mixed success. For example, 2-in-1 devices are the fastest growing segment of a PC sector that is still declining. IT organizations tend to favor 2-in-1 devices because not only do they support Windows applications, they eliminate the need to support a separate tablet device alongside a phone and a PC. The challenge facing Samsung is not only competing with Microsoft, but also pushing aside rivals such as Dell and Lenovo to gain a much larger piece of a market for mobile computing devices where competition is already pretty fierce.

Previous articleThreatcasting 2026: Anticipating a Blended Cyber Attack with Up to 2M Fatalities
Next articleThe FCC’s Promised Change Is Here