Conventional wisdom holds that PCs will remain relevant in the enterprise because while other devices can consume content, it’s still a challenge to employ them to create content. At a launch event in New York today, Samsung Electronics unveiled a Note8 smartphone that takes advantage of a 10-nanometer processor, 6GB of RAM, and up to 256GB of storage using a microSD card to considerably expand the range of content that can be created and stored on a smartphone.

The Note8 sports a wrap-around 6.3-in. display and comes with an S-Pen that can be used to write and edit up to 100 pages of notes on the display. Those pages can then be shared as an image via email and social media as a GIF file. In addition, Samsung has added a Live Messages capability that makes it possible to add animations to a note and enhanced a Translate feature of the S Pen that allows end users to hover over text to quickly translate individual words and entire sentences into 71 different languages. Support for the Bixby digital assistant that Samsung developed is also included.

The Note8 also includes two 12MP rear cameras with Optical Image Stabilization (OIS) on both the wide-angle and telephoto lenses. In addition, Samsung has developed an App Pair capability to allow users to pair applications on the Edge panel in a way that enables them to simultaneously launch two apps in Multi window mode.

Kevin Gilroy, executive vice president and head of Samsung Business, says mobile devices have emerged as a key platform for enabling a range of digital business applications across multiple vertical industries. Coupled with Samsung Knox security software, Gilroy says mobile devices such as the Note8 make it possible to secure applications without compromising the end-user experience.

“We’re having a lot of conversations with enterprise about their mobile strategy and digitization,” says Gilroy.

The Note8 can also be attached to a DEX docking station to make it possible to interact with web applications and desktop virtualization software from VMware and Citrix. In addition, Samsung has optimized Note8 for use with video conferencing applications from vendors such as Zoom. 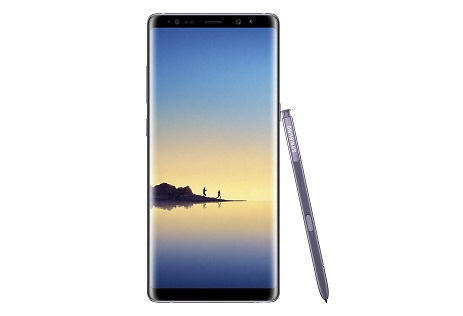 PCs are not going away any time soon. But the amount of time end users are interacting with smartphones versus other devices is shifting. The challenge facing organizations will be coming to terms with the degree to which smartphones can now wag the enterprise dog.