IT Focus Shifting to New ‘Smart’ Technologies, BPM and Security

Over the past few years, the technology industry has seen tremendous growth in cloud and mobile technologies, so much so that they are now mainstream and part of the everyday business plan. Cloud-based resources are now commonplace and used significantly in production environments. Mobile technologies are now a fact of life for many IT organizations, with entire business models springing up around mobile services.

Given the integration level these initiatives have reached, according to research from QuinStreet Enterprise, IT leaders and business executives are beginning to focus their eyes on new IT initiatives, including so-called “smart” technologies, as well as efforts to better integrate previous IT investments into the business. Improving security and mitigating risk, business process management (BPM) and smart technologies were identified as the top three initiatives for business leaders this year. Not surprisingly, both IT and business executives cited a lack of resources and the increasing complexity of information technology as their top concerns, largely echoing results from 2014.

In this slideshow, we’ve featured highlights from the survey.

Read more: Move Over Cloud and Mobility, Executives Have Their Eyes on New Technologies The Next Stage in Technology

Click through for more on research looking at how IT and business priorities are changing, as identified by QuinStreet Enterprise. Given the evolving nature of security threats and the all-too-frequent reports of high-profile hacking incidents, it’s not surprising to find that security and mitigating risk remains the top IT initiative year-over-year. The public is beginning to understand the gravity and consequences of data breaches and holding organizations accountable. As such, security has become a competitive differentiator rather than just a cost center. 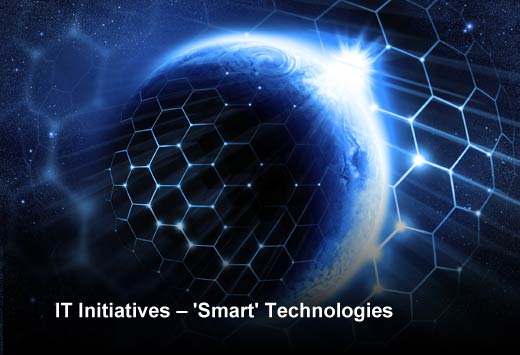 ‘Smart’ technologies – IoT, wearables, interactive whiteboards – are beginning to take center stage for business, both in the advantages they present the business as well as the potential risks. Tied with ‘smart’ technologies for second place in this year’s top initiatives, the interest in BPM may be evidence that organizations are looking to better integrate data from their recent investments in cloud and mobile platforms into their business processes. IT Challenges – Lack of Resources

Having adequate resources is a perennial issue among IT organizations, which need to carefully balance the complexity of technology with the demands of business users and customers, tight budgets and shifting priorities. This may explain the renewed interest in BPM, as it promotes automation and can help with cost cutting and controlling headcounts. The increasing complexity of IT was the top challenge listed by IT executives, likely due to managing on-premises, hybrid and cloud environments, as well as managing massive amounts of data. The continued integration with outside vendors also likely adds to the complexity issues. Preparing for the Future

Despite the long-perceived gap between technology and business leaders, the 2015 survey found that a significant number of business executives (61 percent) are now involved in the early stages of the IT purchase decision process.