As companies like Google and Facebook come under fire for increasing and often unwelcome online tracking, TRUSTe, a leading global data privacy management (DPM) company, recently announced findings from its latest privacy study – letting consumers speak for themselves about what they like and don’t like about online behavioral advertising (OBA). Conducted online by Harris Interactive on behalf of TRUSTe, the “2013 U.S. Consumer Data Privacy Study: Advertising Edition” surveyed 1,171 U.S. Internet users between June 12 and June 19, 2013.

Although privacy concerns remain high, TRUSTe’s 2013 survey shows that increased transparency and privacy controls engender more positive feelings about OBA. In addition, consumers want businesses to be clear and forthright about data usage and to give them the ability to make their own privacy choices. Only by doing so can businesses expect to create a strong and lasting foundation to support new technology innovations, such as online tracking.

“As demonstrated time and time again through numerous privacy firestorms, online companies that don’t clearly explain what’s happening with customer data or fully inform users of their choices contribute to a climate of fear,” said Chris Babel, CEO for TRUSTe. “As our research shows, we think that by listening and responding to what users want, we can eliminate that fear and increase trust in the ever-growing data economy.”

“This poll confirms that businesses that demonstrate their commitment to consumer privacy fare far better in the marketplace than those that do not. Giving consumers notice of online behavioral advertising and the ability to opt out through the DAA AdChoices icon is simply the best decision a company can make,” said Genie Barton, VP and Director of the Online Interest-Based Advertising Accountability Program administered by the Council of Better Business Bureaus (CBBB). “It benefits all companies to adhere to the highest privacy standards when using interest-based advertising, and we will continue to build consumer trust in businesses by rigorous enforcement of the DAA Program.” 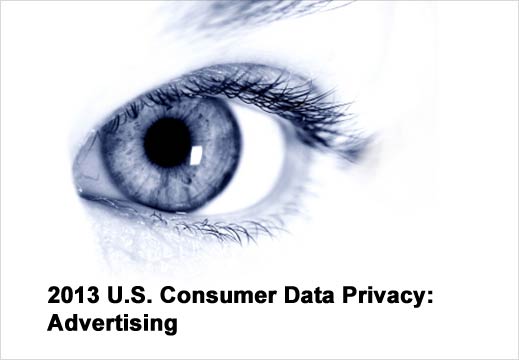 Click through for findings from a survey regarding privacy issues and online ad tracking, conducted by Harris Interactive on behalf of TRUSTe. 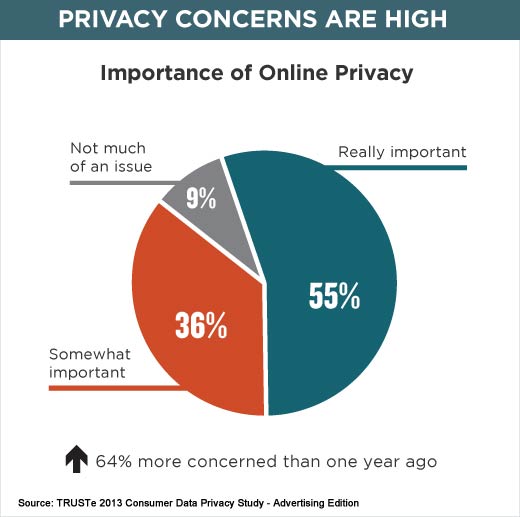 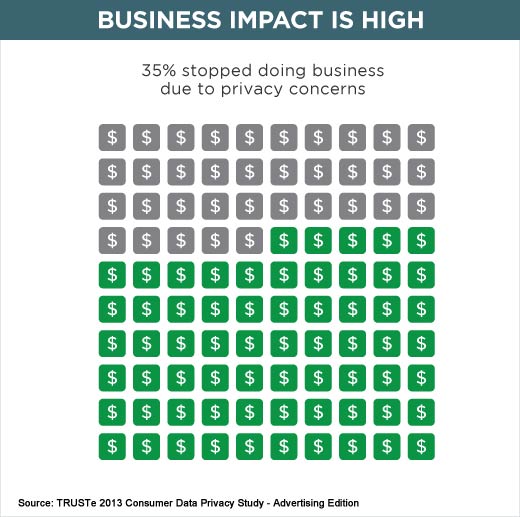 One out of three Internet users say they have stopped doing business with a company or using its website due to privacy concerns. Fifty-two percent do not like the concept of Online Behavioral Advertising (OBA) rising to 69 percent amongst smartphone users. 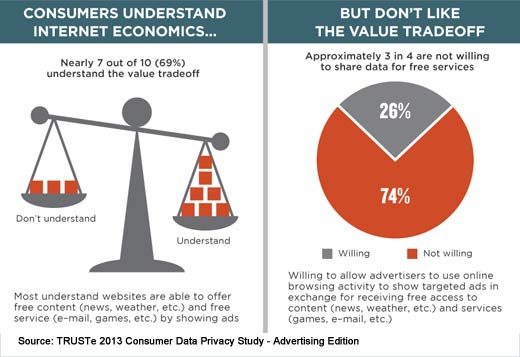 While 69 percent of Internet users understand the value tradeoff of online ads in terms of free content, only 26 percent are willing to let advertisers use online browsing to show them targeted ads for free content and services. 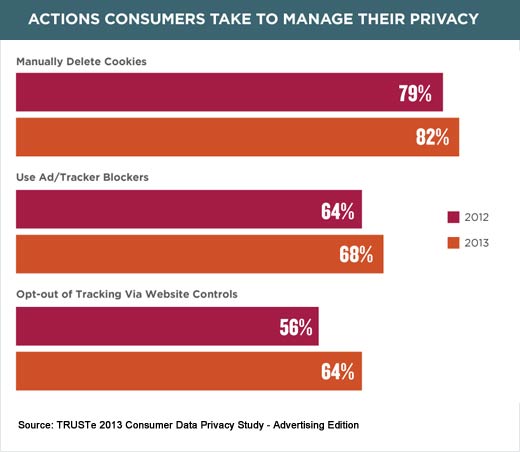 Ninety percent of Internet users report opting out of online tracking through browser settings with 82 percent manually deleting cookies and 68 percent using a browser privacy add-on/features for ad-blocking or anti-tracking and 54 percent (up from 44 percent in 2012) opting-out of tracking via search engine settings. 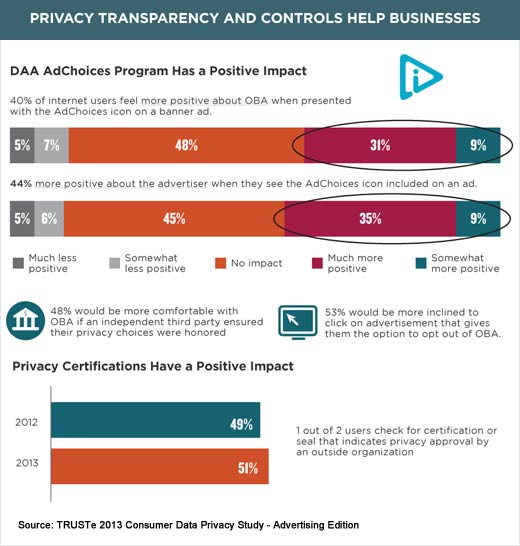 Compared with 2011 and 2012, a growing number of consumers not only feel more positive toward OBA when they are given the choice and ability to opt out but also are more willing to click on an advertisement when they have been given the option to opt out.