The most recent numbers on smartphone market share suggest that Apple has gained back some ground it might have lost to the Samsung and Android camps, according Retrevo.com. With all the jousting between Android and iOS, Retrevo wondered if consumers were considering jumping over to the other camp for their next smartphone. In the most recent Gadgetology report, Retrevo found out how loyal iPhone and Android users were to their platforms and asked phone buyers what they were looking for in their next smartphone. Here’s what they found. Click through for findings from a smartphone OS loyalty study from Retrevo.com. No signs of a mass defection to Android.

In general, both Android and iPhone owners appear satisfied with their phones, enough to be able to say their next phone will be the same type. It also doesn’t appear that Apple has much to fear for the moment from a mass defection to Android. Surprisingly, more Android owners say they might make an iPhone their next phone, as opposed to iPhone owners going to Android. Apple iPhone users are also more confident phone buyers than other users, with the lowest percentage of “undecided” buyers. Everybody wants a larger screen on their phone.

Of the choices Retrevo presented to participants, the top two things consumers say they are looking for in their next phone are larger screens and features they don’t currently have. Since most consumers always want some new feature they don’t currently have, Retrevo sees larger screens as a very important feature when phone buyers shop for a new phone. This is reinforced in another question, where the number-one item phone users wished was different about their phones was a bigger screen. Men lean toward Android and women lean toward iPhone. Slightly more women than men said their next phone would likely be an iPhone, compared with quite a few more men than women favoring Android. Over a third of iPhone users are holding off on purchasing a new phone. 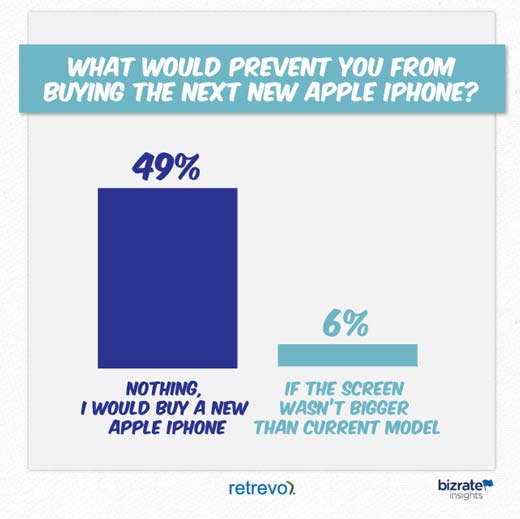 As loyal as iPhone users appear to be, quite a few of them (35 percent) say they are holding off the purchase of a new phone until they see what Apple has to offer in the next iPhone. They might be waiting to see what screen size Apple has to offer, as almost 10 percent of iPhone users interested in buying the next iPhone said that no screen size increase could be a deal killer. Previous articleSurvey Finds IT Pros Proud of Career Despite Tradeoffs
Next articleCan Bright Minds Brought Together on a Plane Solve Tech Talent Woes?