If Amazon does, in fact, enter the tablet market with a low cost Android tablet this fall, they might be able to change the playing field to a lower margin one where Apple would be less able to compete. Could a low cost Amazon Android tablet present one of the first serious contenders to the iPad? Based on the latest Retrevo Pulse Report, it appears that consumers are ready to buy a low cost tablet and are very keen on one from Amazon. Click through for results from a Retrevo study on what consumers really want in a tablet. 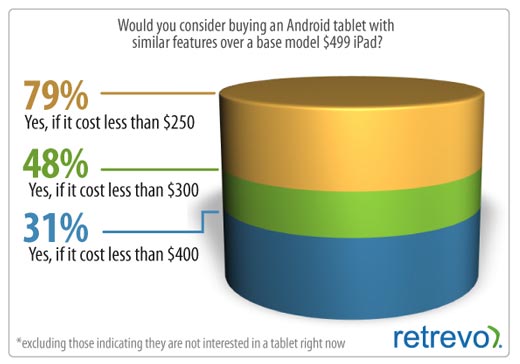 Every time Retrevo asks consumers what would get them to buy a tablet, low price comes out on top of the list. In the most recent study, almost half (48 percent) of respondents said that $300 was the price point that would get them to consider an Android tablet over an iPad. Apple has traditionally been able to command a price premium for quality devices, but if someone like Amazon who thrives on low margins can move the playing field, Apple may find it harder to command high prices. Despite the fact that Apple makes a lot of money on companion products like apps, music, and software, Amazon may be in a better position to sacrifice a high profit margin on a tablet or razor in return for revenue from razor blades like books, music, videos and apps. There's even an Amazon App Store whose name Apple was recently unable to legally block them from using. Amazon has not made a big secret of the fact that it plans on entering the tablet market most likely with a competitively priced Android tablet appearing early this fall. Could Amazon be Android's knight in shining armor that could help Android create a stronger presence in the tablet market? When the study asked consumers which manufacturer they would most likely buy a tablet from, Retrevo was surprised to see a high percentage of potential tablet buyers putting Amazon (55 percent) at the top of their list. It is possible that some respondents confused Amazon the manufacturer (Kindle) and Amazon the reseller, but in any case it looks likely that consumers prefer an Amazon branded tablet over ones from more established tablet manufacturers like Samsung and Motorola. Despite the fact that the Apple iPad continues to dominate the market it appears more consumers are willing to consider an Android tablet and many more are undecided. When the Retrevo Pulse study asked consumers about buying a tablet this year half as many said they were planning on buying an Android tablet as an iPad with half again indicating some other tablet. 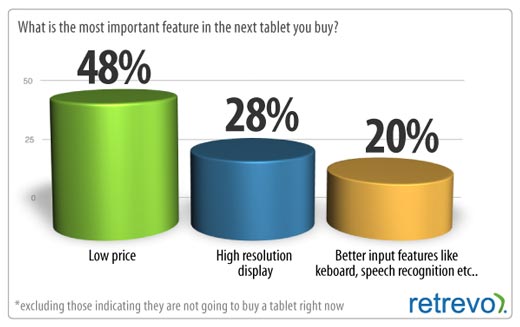 The latest rumor out of Cupertino says we might see a widescreen high resolution iPad possibly called the iPad HD sometime this fall. With a high resolution display showing up second (28 percent) on the list of important tablet features (behind price) if Apple bumps up the resolution in the next generation iPad, it could continue to lead the market. Furthermore, as Apple continues to improve the hardware and the number of native iPad apps greatly exceeds the number of native Android tablet apps, even a new low cost tablet might not be enough to diminish Apple's dominance in the tablet market. However, if anyone appears to have a chance at knocking Apple off the tablet hill, Amazon with a low cost Android tablet, might just be the right contender.