In mid-2011, IFS, a global enterprise application company, conducted a study among manufacturing executives and professionals of middle market to large manufacturers to better understand their interest in and demand for mobile device access to enterprise applications. The study found that while many respondents viewed the mobile interface as an important consideration in enterprise software selection, few respondents actually have access from their mobile device.

In the study of more than 281 manufacturing executives conducted with analyst firm Mint Jutras, only 27 percent of respondents were performing any functions in enterprise software using a mobile device. And 47 percent of respondents said they had little to no access to ERP from a mobile device. Among customer relationship management (CRM) users, 32 percent said they had little to no mobile access to their CRM application, indicating that mobile access is more mainstream for CRM than it is for ERP, but is still not prevalent.

All in all, mobile access to enterprise software appears to be a tremendous opportunity to increase productivity given that additional work can be completed while in transit, both inside and outside of work hours, and the benefits may far outweigh the cost of the intrusion of a mobile device. 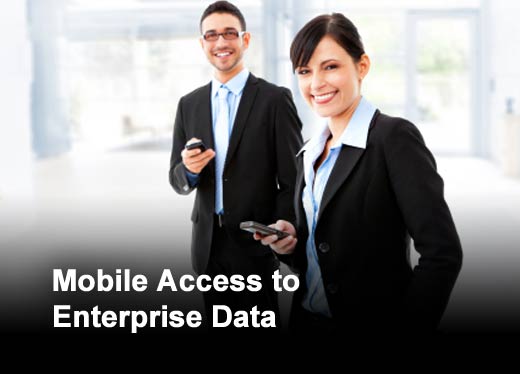 Click through for results from an ERP mobility access study conducted by IFS North America and Mint Jutras. More than half of respondents (53 percent) indicated that the BlackBerry was the mobile device they currently used (followed by iPhone at 29 percent and Android at 20 percent). BlackBerry’s domination is not likely to last though as 42 percent of respondents said that their next mobile device would be an iPhone, followed by BlackBerry at 37 percent. Android makes some headway but is still in third place with 26 percent. 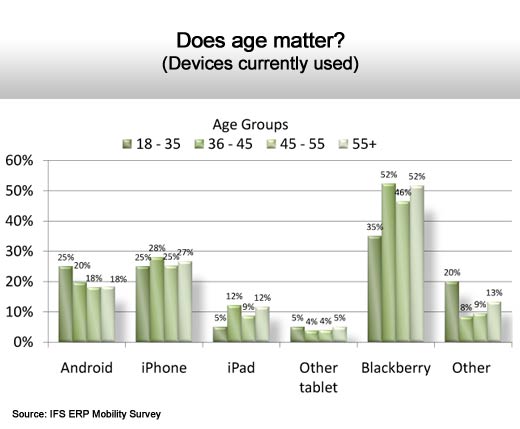 The more likely respondents were to work outside of business hours, the more likely they were to use a BlackBerry instead of an iPhone or Android. Think of it this way… iPads dominate over other tablets, but the number of respondents carrying them for business use is still relatively small. While iPad appears to be poised for significant percentage growth, its small initial share among this survey sample indicates that even its projected 114 percent gain still means it lags smartphones in terms of actual use. Only 27 percent of respondents are currently performing functions in an enterprise application from their mobile device. The small percentage is likely influenced by the limited mobile connectivity of the enterprise applications themselves. Connectivity requires a modern underlying technology not available on legacy applications and older versions of software. While a negligible few rate their level of accessibility as excellent, a third to almost one half (varying by application) have little to no access.  Respondents accessing CRM via a mobile device are more likely to have access, but no more likely to rate it as excellent. 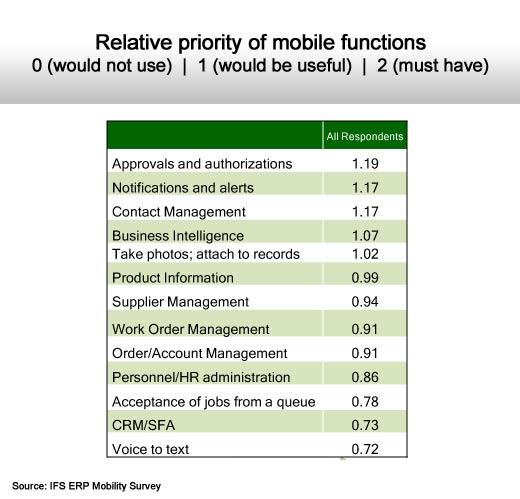 Survey respondents were asked to prioritize various tasks that could be performed with enterprise applications using a mobile device. A handful of tasks were rated more highly than others. One thing that these tasks have in common is that they all deliver real-time data and facilitate time-sensitive processes that allow the user to actively participate in business processes using the mobile device. 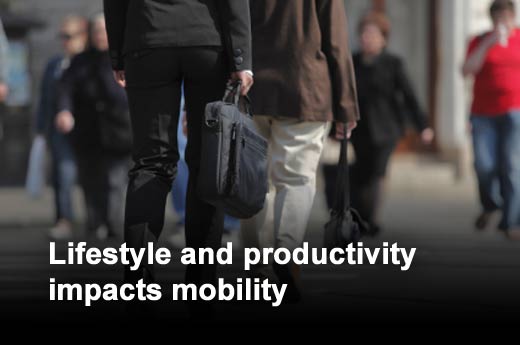 Today, the lines between work and private life are blurred, even in a traditional brick and mortar industry. Mobile access to enterprise software can facilitate this blended lifestyle, but what impact will it have on the way people work, how often they work and where they work? Will this drive new productivity for people who spend time in transit or in other locations where a hand-held mobile device is the only viable tool? Will it cause work to increasingly encroach on personal time? 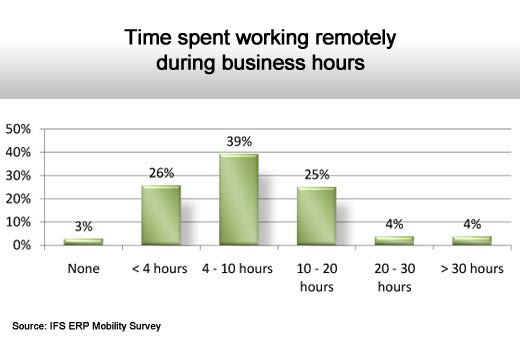 Most respondents spend at least four hours per week working remotely. Often this translates into one day a week spent working outside the office, either through travel or in search of quiet time away from the office. Most homes are now connected and reducing the cost of commuting is desirable. An even larger percentage of respondents indicate they require a connection to enterprise software “on the move” at least once per week. In these situations, sitting down, logging in and working on a laptop is impractical. Meanwhile, the majority of respondents report working on personal time either every day or several times a week. Work-life balance advocates may wonder about the degree to which always-on connectivity to the enterprise system my cause individuals to work more on personal time and how much this may disrupt private lives. 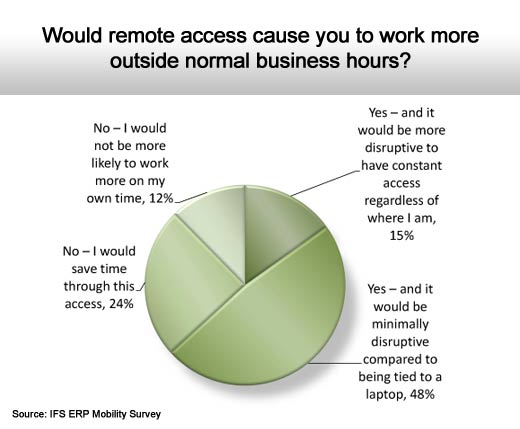 Only 15 percent indicate remote access to enterprise data would be more disruptive. Easy access through a mobile device, anytime, anywhere, allows a decision maker to connect and act immediately without the disruption of finding an Internet connection and “firing up.”