Seven Tips to Attain Purpose and Happiness in Life and Work

I don’t know how many female tech CEOs are in Silicon Valley, but I do know they’re a rare breed. And the ones who are as successful as Lisa Falzone are exponentially fewer and farther between.

As co-founder and CEO of Revel Systems, an iPad-based point-of-sale system provider in San Francisco, Falzone says it just doesn’t have to be that way. And it’s not like she doesn’t have the Market Street cred to say that. With high-profile customers like Popeyes Louisiana Kitchen and Little Caesars Pizza, Revel, at barely four years old, already competes head-to-head against the likes of Oracle’s Micros and NCR’s Aloha.

When I spoke with Falzone recently, I was far too polite to ask her how old she is. But she apparently hasn’t hit 30 yet, because she was reportedly 27 when she made the prestigious Forbes “30 Under 30” list in 2012. If some young, successful Silicon Valley entrepreneurs are jerks, you don’t have to speak with Falzone very long to be comfortable that she isn’t one of them. When I asked her what she had found she was least prepared for in running the company, her response was refreshingly candid: She cited her own naiveté about what it would take to find good people.

“I underestimated how hard the people portion is—finding people who have the right skills and who fit into the culture,” Falzone said. “I made a lot of mistakes in the beginning. I wasn’t very good at interviewing people—I had kind of a naïve view of these types of things.”

I noted that only an estimated 3 percent of Silicon Valley tech startups are founded by women, and I asked Falzone why she thinks that’s the case. She said at least part of the reason has to do with the investors.

“Only 6 percent of VCs are women,” she said. “VCs like to invest in people like themselves, who have been successful in the past. There are very few women who have brought a company from founding all the way through to IPO, so VCs haven’t really seen it happen in the past. It’s still just about breaking the barrier. It will happen—I think in my children’s generation, it will be a lot different.”

I asked Falzone if gender was an issue in getting venture capital in her case. She said nobody ever comes out and says gender is an issue, but it’s difficult not to draw that conclusion. 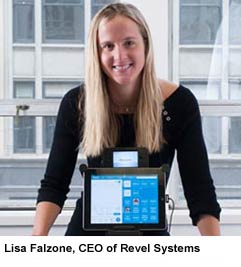 “You walk into these VC offices, and the only women you see are the personal assistant and the receptionist,” Falzone said. “There’s a gorgeous supermodel at the front desk, and you walk into the meeting, and there are no females at all.”

So was that intimidating for her? Falzone said she was too oblivious to be intimidated.

“I was really very blind to the whole thing,” she said. “I never realized there was so much sexism until I got into the business world, so I didn’t really think about it. Now, looking back on it, I think I was a little oblivious to it.”

Falzone provided an enlightening case in point, recounting her experience when she went into one of her first VC pitches with her male co-founder, Chris Ciabarra.

“I went through one of the slides very carefully, and no one said a word after I went through it,” she said. “And then my co-founder, who wasn’t actually paying attention, repeated the slide, and said almost exactly what I had said. They were saying things like, ‘Oh my God, that’s such an ingenious idea.’”

At the same, Falzone said being female has been helpful in some ways.

“I think it really helped with PR—it helps you differentiate yourself,” she said. “It makes you stand out a little bit more—it makes people notice the company more.”

I mentioned to Falzone that earlier this year I had interviewed an organizational psychologist and leadership consultant who said he had found that women make better leaders than men do because they’re naturally more adept at teambuilding. I asked her if she thought there was any merit to that, and she said she didn’t think such a sweeping generalization can be made. But she did mention one differentiator that women have.

“I know women who are good at teambuilding and women who aren’t,” she said. “I think in general, women are more humble, which is a differentiator, because so many male tech CEOs have such huge, huge egos. My women friends don’t have such big egos, typically.”

“More women, in general, just need to try,” she said. “I went to Stanford, and about a dozen of my college friends started companies. And all of them are men. They weren’t any smarter. They just tried. Whether they’ve been successful, or haven’t been successful, they’re trying. So more women need to do that. They need to be willing to try.”