The Case for ‘Craft IT’

There is an unnerving sense that IT is becoming impersonal and indifferent. Given pressure to contain budgets, some CIOs are turning to mass-produced IT services built on offshore labor, mediocre infrastructure and tradeoffs that put cost efficiency over service. But, according to David Corey, general manager, IT Services at ATS, much like mass-produced foods filled with ingredients no one can understand, “junk food” IT can make a company sick and sluggish.

The alternative is to shift the information technology sector toward what Corey calls “Craft” IT. He admits to liberally borrowing this concept from the food and beverage industries, where demand for locally grown, nutritious and environmentally friendly food has transformed American culinary culture. Today, who picks taste-bud-abusing beer when there is a quality alternative? Why eat chemicals out of a wrapper that has traveled 8,500 miles when it’s equally convenient to buy local farm-fresh goods?

Not all calories are equal and neither are IT services. In managed IT – and arguably all IT niches built on service to a customer – a craft mentality will lead to more productive and happier end users. Craft IT has three foundations: people, infrastructure and empathy. 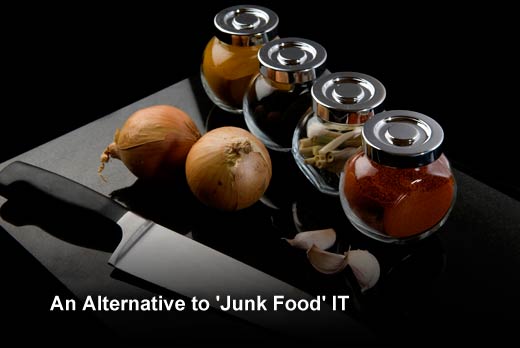 An Alternative to ‘Junk Food’ IT

Click through for more on why a craft mentality may lead to more productive and happier end users, as identified by David Corey, general manager, IT Services at ATS. People – Some Should Be Local

In 2013, the Hackett Group predicted that between 2002 and 2017, half of all North American and European IT jobs would be eliminated, due in large part to offshoring. Craft IT resists the trend, calling for both on-shoring and a local presence wherever clients operate.

There’s no disputing that a service desk based in the developing world is less expensive than one in the U.S. – but at what invisible costs and lost opportunities? Sure, the offshored service desk might have someone answer the phone, but the representatives often follow a script and can’t actually diagnose and solve any but the most rudimentary IT problems. If employees can’t use their devices and software, shouldn’t we add the lost productivity to the tab of offshored IT? At scale, the lost hours, stress and boiling frustration become quite expensive.

In Craft IT, the integrated service delivery team is professionally trained, domestically based and has field workers in each client’s area. These field workers have an intimate knowledge of the client’s business and end users. They are either located on-site or can be there within minutes, if necessary. There’s a myth that craft, artisanal products aren’t scalable. Craft brewers like Rogue, Dogfish Head and Magic Hat have clearly scaled without sacrifices to the product. They can do this because regardless of how much beer they produce, they have rigid standards for the ingredients and production method. In Craft IT, ingredients are the infrastructure.

IT providers have a responsibility to be transparent about the data centers, software, networks and facilities they use. If a multibillion dollar enterprise is going to trust its phone system, servers, ERP or cybersecurity to an outside expert, that expert better use the most reputable and proven brands. Craft IT may bring to mind the image of “home grown” infrastructure, but that is not the case. Craft IT is built on best-in-class infrastructure that is resilient and scalable.

Similar to the way a family invests in a grass-fed cow for a share of the meat, companies are essentially investors in managed IT. That investment should go toward top-notch technology that produces a greater dividend for every client. IT providers have a duty to make the client’s internal IT organization look heroic. To do this, they have to add value by feeling and thinking like the companies they serve.

This basic human empathy is found in abundance through the craft industries, but it is often missing in IT. Empathy is overshadowed by a ‘victim’ mindset: “The end user broke another laptop that I have to deal with.”

That attitude can’t stand. When something is broken, it has an impact on the end user and company. Maybe this salesman has the most important presentation of his career, and without a working laptop, he can’t display the slides. Maybe this marketer is orchestrating a whole product launch, and with the file server down, her team can’t prepare.

Craft IT empathizes with the end user and thereby finds genuine motivation to solve the problem as quickly as possible. The Craft IT pro cares about the person and cares about the brand. In an industry where automation, remote service and globalization are the norm, it must be odd to hear an IT guy calling for a human touch, in-person service and a local presence. Local and global IT are not mutually exclusive. In recent years, though, IT has swung violently toward the impersonal. Craft IT is a call to balance out the digital and human sides.

IT is now an integral part of businesses that are traditionally not high-tech. Retailers, restaurants and manufacturers, among many others, are beginning to identify as tech companies. Yet no single IT department can be an expert at everything, just as no single farm can grow every crop at a high standard. Global economies now depend on an ecosystem of IT service providers to power each and every business. Only a craft mindset can keep this ecosystem healthy and sustainable.