According to Dice, reporting on numbers from the Bureau of Labor Statistics, the unemployment rate for tech professionals continues to remain low (3.5 percent) compared to the national average (7.7 percent). Despite a lower than national average rate, however, the number of tech professional voluntarily choosing to quit their positions (380,000 – average for first two months of Q1) is still running under the 10-year monthly average of 402,000. Additionally, the number of layoffs and discharges averaged 386,500 for the first two months. Having more layoffs and discharges than voluntary quits is the job market we have, not the job market anyone wants. Click through for a snapshot view at how tech employment is currently trending, as identified by Dice.com. 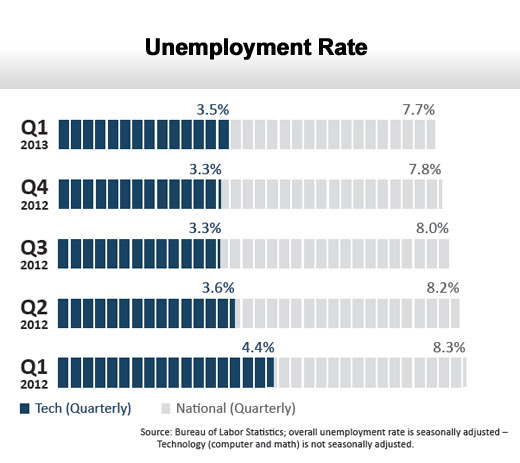 Taking the long view, what’s changed since March of 2004? 543,500 positions have been created in technology consulting, 236,300 and 17,000 jobs have been lost in computer and electronics manufacturing and data processing and hosting, respectively.

In the first quarter of 2013, the growth pattern is still evident in technology consulting, with more than 17,000 new positions added, while jobs are still being lost in manufacturing and hosting. The number of women working in technology consulting has grown by 156,100 since March 2004. But, as a percentage of that workforce — the rate is steady at 31 percent. The position gap is still evident, even if the like-for-like pay gap has disappeared.

Tech changes, but workforce trends have more or less stayed the same, with one big exception — turnover. 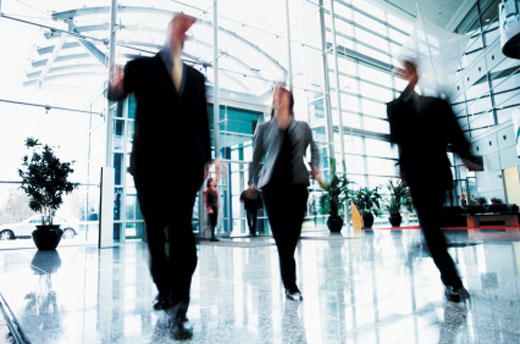 During the first two months of the first quarter, 380,000 employees in professional and business services quit their positions on average, according to the Bureau of Labor Statistics JOLTS report. That’s down from the fourth quarter 2012 rate of 389,000 per month. According to the NBER, the previous recession to the Great Recession ended in November 2001. In the fourth quarter of 2001, 494,000 professionals on average quit their job each month. In this recovery, there hasn’t been a single quarter that cracked 400,000 – let alone approached 500,000.

According to the BLS, “the quits rate can serve as a measure of workers’ willingness or ability to leave jobs.” Despite the good market in technology recruiting, shaky confidence in the job market is somewhat justified.