The employment picture for technology professionals remains bright to start 2014, according to a Dice.com survey of nearly 900 tech-focused hiring managers and recruiters. Click through for a closer look at tech hiring trends for the start of 2014, as identified by Dice.com. Just as they did in Dice’s mid-2013 hiring survey, nearly three out of four respondents (73 percent) reported planning to hire more technology pros in the six months ahead. The difference? Nearly one-quarter or 24 percent of respondents indicated their additional hiring will be substantial, as compared to 19 percent who felt that way six months ago.

Compensation continues to be the foremost driver moving tech job candidates to quit their current positions: 75 percent of the hiring pros surveyed cited pay as a reason for tech veterans leaving their current employer. “The New Year should be ‘all systems go’ for tech professionals on the career front. There aren’t many times when you can write your own ticket, but this consistent optimism and upward pressure on compensation means it’s time to capitalize,” said Shravan Goli, president of Dice. 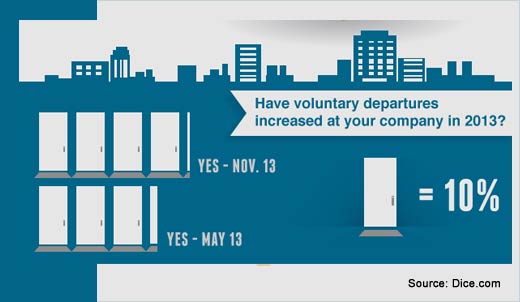 Asked about the incidence of quitting at their company, 42 percent of corporate hiring managers reported an uptick in voluntary departures during 2013, up from 33 percent who said the same thing at mid-year. Several answers suggest employers are working harder to retain existing tech staffers and to attract new employees. More than four in 10 respondents (41 percent) report seeing an increase in counteroffers from existing employers, up from 39 percent six months ago. And, slightly more hiring manager and recruiters (34 percent) are seeing candidates turning down job offers, as compared to mid-year. There’s also more security in the workplace when it comes to tech pros and the possibility of layoffs. Three-quarters of hiring managers reported no likelihood of layoffs within their organizations over the next six months. That’s up from 65 percent who made the same prediction in June of this year.