Survey Indicates Improved Outlook on IT Administrator Stress in U.S.

GFI Software™ recently announced the results of its second annual IT administrator stress survey, which revealed that the number of IT professionals considering leaving their job due to workplace stress has declined from 67 percent last year to 57 percent in 2013, a 10 point drop in one year. While the percentages are still staggeringly high, the results suggest a measure of improvement in working conditions and attitudes over the past 12 months. The outlook is not so rosy in the UK (see this related announcement: GFI Survey Shows Rise in IT Administrators Wanting Career Change Due to Stress), where 73 percent of IT professionals are considering leaving their job due to workplace stress, an increase of four percentage points from last year’s figures.

The independent blind survey of 207 IT administrators in U.S. organizations with more than 10 employees was conducted from March 5-12 by Opinion Matters on behalf of GFI Software. The survey gauged respondents’ stress levels at work and revealed their opinions on their main stressors, as well as how their stress level compares to friends and family, and how it affects their personal and professional lives.

Nearly one-third of those surveyed cited dealing with managers as their most stressful job requirement, particularly for IT staff in organizations with fewer than 50 or more than 500 employees. The other top sources of workplace stress for IT managers were lack of IT staff and tight deadlines, with 24 percent and 20 percent of respondents, respectively, citing these as primary contributors to their stress levels. 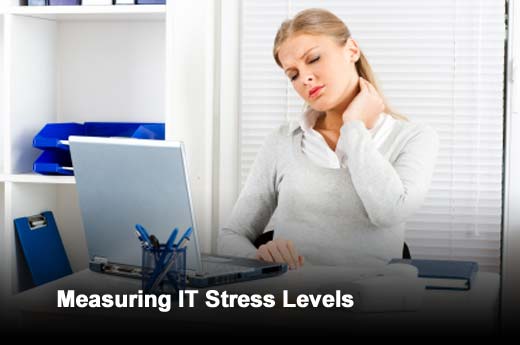 Click through for findings from a GFI Software survey on workplace stress for IT admins in the U.S. 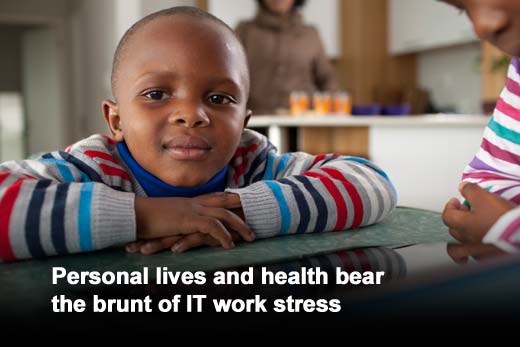 Of great concern is the impact that work stress has on health and relationships. The 2013 numbers show a slight improvement, but the problem is still pervasive among IT administrators. While 73 percent of participants revealed that their jobs have negatively impacted their personal lives in a general way, the survey discovered some specific impacts: “The increasing importance of IT in the workplace and the 24/7 availability paradigm that has been created obviously creates a stressful atmosphere for many IT administrators,” said Phil Bousfield, general manager of IT Operations at GFI Software. “Companies are more reliant than ever on IT innovation, uptime and speed of deployment, and thus, IT staff members are under extreme pressure to deliver for the benefit of the whole business. While it’s promising to see the U.S. survey results reflect a slight improvement in morale, it’s also concerning that more than half are still stressed to the point that they are actively considering leaving their current role. For SMBs in particular, the research is a stark reminder that IT staff need to be supported and given the right resources to do their job efficiently – and that management needs to be an enabler, not an obstacle for IT progress.”