Given the image of salespeople popularized in iconic plays such as Glengarry Glen Ross, it is more than understandable how some people might think that the average salesperson is motivated solely by compensation. In reality, salespeople, like other employees, have career goals and aspirations, none of which are addressed in the typical customer relationship management (CRM) application.

To address that specific issue, Salesforce.com earlier this year rolled out Work.com, a software-as-a-service (SaaS) application based on technologies it acquired. It is specifically designed to help sales managers manage salespeople as opposed to merely keeping track of the sales pipeline in a CRM application. This week, Salesforce.com took that effort one step further by announcing the anticipated integration of its namesake CRM application and Work.com. 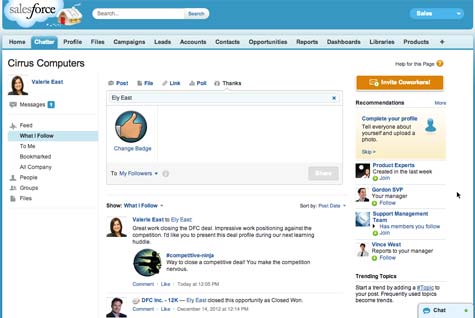 According to Daniel Debow, vice president of Rypple at Salesforce.com, salespeople leave companies for pretty much the same reason as everybody else: They don’t get along with or respect their boss. Unlike losing another employee, however, the time it takes to replace the average salesperson can wind up costing the average company $1 million in lost revenue, says Debow. The idea behind Work.com, says Debow, was to create an application that makes it easier for sales managers to keep track of the development of their sales staffs.

While compensation no doubt drives a lot of the behavior of sales people, most of them at least in this day and age are not as purely coin-operated as they might have been in the past. Like other employees, they are looking for feedback and coaching that goes beyond negotiating what their next sales quota might be.

Right about now, of course, many sales managers are writing up annual performance reviews, mainly using a human resource application. Debow argues that those reviews have little to do with actually coaching sales people. They’re really legal documents where sales managers wind up writing essays about their staffs in order to create an audit trail in case someone needs to be fired in the coming year. While writing performance reviews will never go away as a requirement, Debow contends the whole process would not only be simpler using Work.com, it would be more relevant because the review process would be based on continuous coaching.

Of course, all this assumes there is an enlightened sales manager in place that actually cares whether their sales people are happy and, by extension, productive. The good news is that given the way sales cultures have matured over the past two decades, that’s increasingly becoming the case.