As interest in NVMe systems starts to build, Micron today announced it has developed a software-defined approach, dubbed Micron SolidScale, that will make shared storage systems available to next-generation servers.

While NVMe promises order of magnitude better I/O performance, Andy Fisher, senior product line manager for Micron, says there is no efficient standard for plugging shared storage into those systems. Without that ability, it becomes impossible for applications residing on one server to see and share data with other NVMe systems.

Announced at a Micron Summit 2017 event, Fisher says Micron SolidState will make use of a NVMe over Fiber (NVMeoF) specification to make it feasible for NVMe servers to access a shared pool of solid-state drives. (SSDs). The SolidScale platform accomplished that goal by connecting multiple nodes using high-speed RDMA over Converged Ethernet (RoCE) fabric. That current implementation is designed for Linux servers employing a 2U node configuration housed in a 24U server rack enclosure.

Micron says NVMe SSDs coupled with a high-bandwidth Mellanox fabric environment add an average of five microseconds of additional latency to an application’s data path when compared to a local in-server NVMe. Micron claims the Micron SolidScale architecture will reduce end-to-end latency under 200 microseconds. Micron says preliminary tests of the Micron SolidScale platform measured over 10.9M IOPS with only three 2U SolidScale nodes. That’s significant because half the I/O potential of an NVMe system is underutilized when relying on existing interfaces. That results in massive underutilization of CPU cores, adds Fisher. 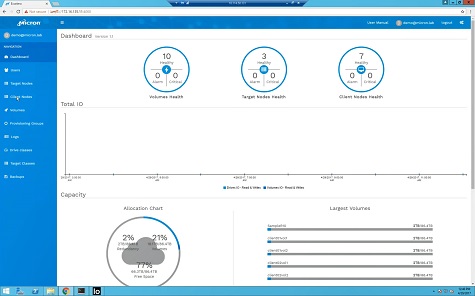 Fisher says Micron SolidScale, available under an early access program today, should start showing up in data centers as its partners move to embrace the new NVMe storage architecture in 2018.

Micron, which this week named Sanjay Mehrotra as its new CEO, does plan, however, to offer products directly to IT organizations based on Micron SolidScale, says Fisher.

NVMe systems are transforming the data center by substantially increasing the compute, storage and networking utilization by dramatically increasing the amount of IT resources that can be invoked in a scale-up rather than scale-out fashion. In fact, the day when server utilization rates run well below 20 percent may finally being coming to a merciful end.

Previous articleWindows 10 S: Microsoft Moves to Lock Down
Next articleDeveloping a Control Mechanism for Drones