Looking Ahead at IT Spending Expectations in 2013

TEKsystems®, a leading provider of IT staffing solutions, IT talent management expertise and IT services, recently released new research showing that IT leaders are almost evenly split on expectations regarding budget increases for 2013. Additionally, IT leaders are gravitating toward investing in core application and infrastructure services and staff, with a greater interest in permanent hiring. Finally, the vast majority of organizations have no concern regarding loss of skills as it relates to baby boomer retirement.

More than 600 IT leaders (CIOs, IT VPs, IT directors, IT managers) were polled in September 2012 to understand the current state of IT spending, skills needs and workforce issues to identify critical areas. The full results of the survey, a video and infographic are available from TEKsystems. Click through for results from a survey on expected IT spending in 2013, conducted by TEKsystems. IT leaders are nearly evenly split on whether IT budgets will grow versus remaining the same or declining. Forty-eight percent expect an increase in their organization’s IT budget, while 52 percent expect it to remain the same (27 percent), decline (16 percent) or didn’t know (9 percent). IT leaders’ confidence in whether their budgets will support the business needs of the organization closely mirror spending expectations. Fifty-four percent are confident that budgets will be adequate, while 46 percent are neutral (25 percent), unconfident (16 percent) or didn’t know (5 percent). Top three impact areas include newer trends such as business intelligence and cloud computing, yet security still remains high. Business intelligence, cloud computing and security were the top three trends expected to have the largest organizational impact. Additionally, more than 58 percent of IT leaders expected the trend towards cloud-based and “as-a-service” offerings to drive an increase in demand for IT skills, while less than 15 percent expected it to decrease. 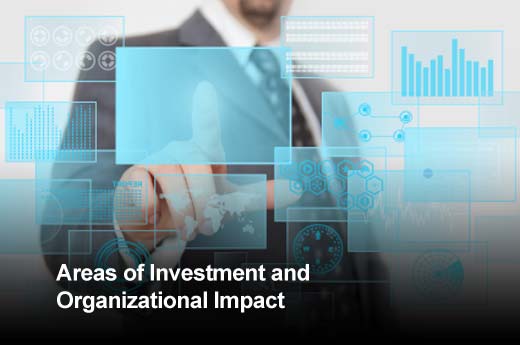 Operations a top concern. IT leaders ranked “operations” as having the largest increase in IT needs, followed by “marketing/sales” and “finance/accounting.” IT leaders slightly positive towards salary increases. In terms of compensation, 55 percent of IT leaders expect their IT staff’s salary to increase, while 44 percent expect it to remain the same (34 percent), decrease (4 percent) or didn’t know (7 percent).