U.S. full-time employees are suffering from work overload. Not a huge surprise, but one would think that as the unemployment rate has improved, some of that burden – at least partially the product of coworker layoffs over the past few years – would have eased by now. In fact, a recent study by Cornerstone OnDemand and Kelton revealed that 68 percent of full-time workers in the U.S. are suffering from work overload, a 14 percent jump from the 2013 study. Additionally, more than 52 percent of respondents reported that their workload situation had worsened over the past year.

Over 60 percent of respondents believe that the overload is actually making them less productive. This has serious ramifications when it comes to the always-on, always-connected digital work style that has been developing over the past few years. The more overworked people are, the more they have to work longer hours; the longer they work, the less productive they become; and the less productive they become, the longer they must work. And at a time when technology tethers people to work like never before, more than a quarter (26 percent) of those surveyed said they feel like they can’t turn off their job outside of work hours or even while on vacation.

Conducted for a second year, Cornerstone’s “The State of Workplace Productivity Report” examines how the ways people work, where they work and the tools they use for work impact their abilities to be productive and successful in their roles. The findings indicate that the tools and management styles of today are not enabling employees to be the workforce of tomorrow. However, the results also point to potential solutions – such as flexible work schedules, the right work environment and wearable technology – that may hold promise for those trying to combat the most exasperating productivity killers in their work lives. Click through for results from a survey on workplace productivity killers and ways to combat them, by Cornerstone OnDemand and Kelton. Having some freedom would likely help employees accomplish more. Sixty-five percent of workers think a flexible and remote work schedule would increase their productivity. The same number of respondents agrees that, given the right technology, in-person meetings could be completely replaced. However, only 19 percent are currently being allowed to work remotely by their employers. When it comes to workplace distractions, 43 percent of employees say that impromptu visits by coworkers are the biggest productivity killer. It’s no surprise then that the top work environment that employees feel fosters the most productivity is an enclosed office (37 percent), followed by partitioned cubicles (23 percent) and open desk layouts (19 percent). Wearable technology is a seemingly underutilized productivity aid. While only 12 percent of those surveyed use wearable tech for work, a little over seven in 10 (71 percent) wearable-tech users say that it has helped them to be more productive. That small number of users is expected to grow; 72 percent of employees believe that wearable tech in the workplace will eventually become standard. The demand is there, as 66 percent of workers would be willing to use wearable tech if it helped them do their job better – a 7 percent increase from last year.

Check out: Survey Finds North American Workplaces Are Not Ready for Wearable Tech 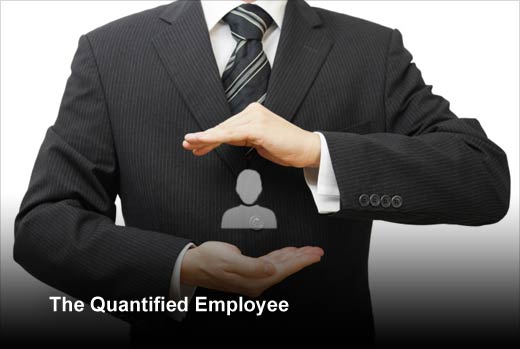 Eighty percent of full-time employees would be motivated to use company-provided wearable tech that allows employers to track their health and wellness data. Some would be enticed to do this in exchange for benefits such as extra 5 percent end-of-year bonuses (67 percent), reduced health insurance premiums (57 percent) or discounts to exercise programs (36 percent).

Nearly the same amount of employees (76 percent) would be willing to do the same for wearable tech that tracks job performance and productivity. In exchange, respondents would be open to receiving an extra vacation day for each month’s data (54 percent), a flexible and remote work schedule (46 percent) or a work week reduced by 5 percent (41 percent).