Now that the shift toward Flash memory of primary storage is well under way, the question at this juncture is not so much when to make the switch but rather how much Flash storage can an organization afford to reasonably deploy. Making it possible to stretch IT storage budget that much further, Hewlett Packard Enterprise (HPE) today unveiled additions to its 3PAR storage array with price points starting at $147,000. HPE also revealed that the maximum Flash storage capacity available on 3PAR storage arrays is now 21 petabytes.

Brad Parks, director of go-to-market strategy and enablement for HPE Storage, says at this point the issue is not so much justifying what application workloads to run on Flash storage as much as it is justifying why an application workload should not be moved to Flash. Given all the additional benefits, including shrinking the physical footprint of the data center and the amount of energy consumed, to eliminating the need to optimize the placement of data on magnetic drives, Park says, usage of Flash storage for both file and block storage is now mainstream.

To back that claim up, HPE today also announced an HPE Get Thinner Guarantee program to provide a free workload assessment and a written assurance of as much as 75 percent savings in storage capacity. 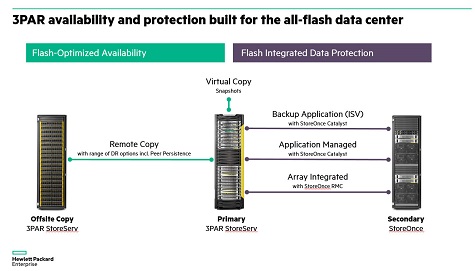 Also unveiled today was an HPE StoreOnce 5500 system that makes use of magnetic storage to provide up to 864TB of storage for backing up data.

While many application workloads are in different stages of their lifecycle, it’s becoming clear that throwing more magnetic storage at those applications is a waste of both time and money. The acquisition cost of Flash storage may still give some organizations cause for pause, but in terms of making the everyday job of working in IT simpler, it’s hard to imagine a technology that can have as much impact as Flash storage.