How the Gig Economy Is Changing the Tech Industry

The Accenture Technology Vision 2017 looks at the key trends that will affect enterprises over the next three years. One of those trends is an increase in on-demand labor platforms and online work management solutions that are driving companies to dissolve traditional hierarchies and completely reinvent their workforces.

“We believe this will drive a workforce revolution: Archaic workforce structures where people had a specific job within an organization are being upgraded to labor platforms that allow more on-demand models, giving people opportunities to work on different things and in different ways,” said Mary Hamilton, managing director and lead of the Digital Experiences R&D group at Accenture Labs, and Alex Kass, Accenture Labs Fellow.

According to the Accenture Technology Vision 2017 companion survey of more than 5,400 business and IT executives, we found:

The gig economy is clearly disrupting the tech industry, both in positive and negative ways. 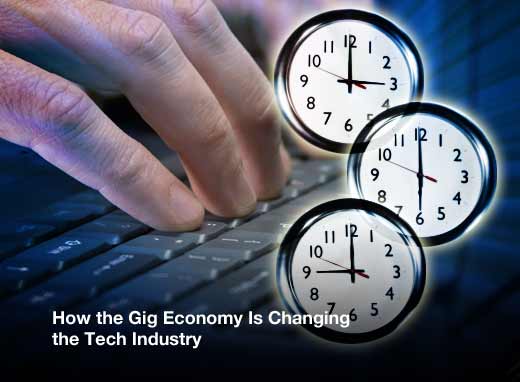 How the Gig Economy Is Changing the Tech Industry

The gig economy is clearly disrupting the tech industry, both in positive and negative ways. Allows for a Freelance Lifestyle

Many tech projects are now executed by external workers engaged on a freelance basis, as independent contractors via flexible talent pools, and as statement of work-based consultants, according to Arun Srinivasan, senior vice president, Strategy/Customer Operations at SAP Fieldglass. “Cloud-based solutions have emerged to help balance the supply-demand equation in the gig economy by helping businesses source work from multiple talent channels and by helping external workers easily find appropriate jobs,” Srinivasan added. “This digitally enabled matchmaking between the job and the worker is encouraging professionals to choose to be part of the liquid workforce and spurring new tech careers.” AI in the Gig Economy

Crowdsourcing platforms used in the gig economy will rely on artificial intelligence, said Wendy Gonzalez, senior vice president & managing director at Samasource. “Gig workers go to these platforms and sign up for a task, such as responding to how an image makes them feel or identifying descriptors for an object. These responses are then crowdsourced to the company as data sets and applied to the algorithms to make them more accurate. For example, high-tech companies use computer vision to do facial recognition and things of that nature, and they will create a project asking people to annotate a person’s face and tag it to train the facial recognition software.” VR in the Gig Economy

Virtual reality could change the way full-time workers and gig employees collaborate and interact, according to a Fast Company article. “VR will be used to accommodate the evolving definition of ‘employee’ to include both workers in conference rooms and gig workers contributing remotely.” Technologies like Slack help easily incorporate short-term contractors doing gigs into the team environment, then exit them as soon as the gig is over. It’s easier than ever to find gig-contractors online, including with upwork, fiverr and more. We can incorporate our gig contractors into our system quickly with time tracking (Harvest), screen sharing (GoToMeeting), direct deposit (Gusto), task management (Asana), and more, according to Andrew Seidman, head of Operations for Digital Reach Agency. Getting Your Startup Running

“The gig economy has created an opportunity for startups to work with experienced and entrepreneurial-minded developers and employees who they may not have otherwise had the ability to hire on a large scale,” said Vainu Co-Founder Mikko Honkanen. “However, the gig economy presents its challenge to startups who need a dedicated team to really get their project off the ground. Independent contractors, by definition, are not in the same kind of relationship as a full-time employee would be. While they may be dedicated, they are not in the traditional sense an ongoing part of the team.” Thanks to technology, we are a global society. And it is tech jobs within the gig economy that will continue that growth, according to Fred Schebesta, CEO and co-founder of finder.com, which is currently in the process of global expansion, operating in five countries around the world with two new markets opening soon. “Hiring tech experts who are doing some work on the side and not looking for full-time work has been instrumental to our global growth,” he said. “We’re able to get top talent to conduct the work that there is not yet a full-time role for. Being an online business, we’re also able to hire workers from anywhere in the world, which has allowed us to recruit some great global talent we wouldn’t have otherwise had access to.” Many of those using the gig economy to find potential clients rely on mobile apps. Those apps rely on companies like Shiftgig, which is just one example of a company leveraging technology to help businesses find workers and ultimately helping fuel the need for tech jobs in this space. “Shiftgig is an app-based mobile platform that connects businesses with reliable, high-quality workers on demand,” explained Eddie Lou, the CEO and co-founder. “While the app’s focus is on the hourly workforce, Shiftgig has a team of around 50 full-time employees, and are currently hiring about 15 more, that focus on maintaining our technology and building new features for it.” A Lack of Job Security

“While qualified IT and tech professionals have many opportunities within the economy, they may not have the same job security,” explained Lindsey Havens, senior marketing manager with PhishLabs. “The gig economy brings with it a backlash of disgruntled workers who want benefits, paid holidays and the other extras that come along with being a full-time employee. Now, more than ever IT jobs are turning into independent contractor positions or freelance. While that may offer flexibility for workers, it doesn’t secure a future down the road.” As the gig economy grows in IT, there are a lot more short-term opportunities than there used to be, Tim Goldstein, author of Geeks Guide to Interviews: 15 Critical Items for the Technical Type, has observed. In turn, it seems to be reducing the longer-term staff augmentation contracts where you basically did a bunch of stuff that now might be gigged out. “For me overall, it has been a negative trend. Most of it revolves around the short assignments and the downtime between them,” Goldstein said. “While many of us are trying to live a little more relaxed lifestyle, hit and miss employment can be stressful.”