As a new hire, would you rather have 22 paid vacation days, 14 paid company holidays, or summer hours that let you take off at 12:30 p.m. every Friday? At non-profit IT trade association CompTIA, everyone enjoys all three, from their first day on the job.

And thanks to a new staff-driven social media campaign, more people know about the emphasis that CompTIA puts on work-life balance for its approximately 200 employees.

“I had decided to do a career page on LinkedIn, and I asked our LinkedIn guru, Kelly, to join me in thinking about how we could convey our positive thoughts at CompTIA about the healthy work-life balance, how we could best represent this,” says Hughes.

“We came up with a campaign where people would post fun pictures about life and CompTIA, showing how they used their summer Fridays or generous vacation time,” says Mahoney. 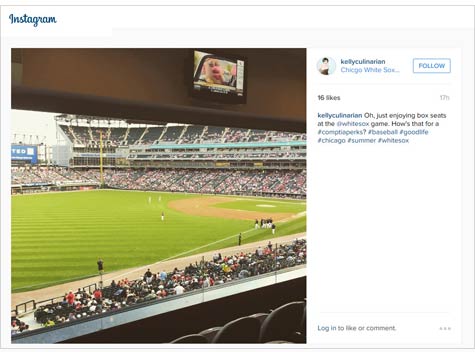 The campaign, for Twitter and Instagram, uses the hashtag #CompTIAPerks, and so far this summer has reached 26,000 accounts on the two platforms.

“The idea actually started as a contest,” says Hughes, “and we thought we would pick one picture as a winner. Since it’s started, we’re now thinking of keeping it going as a long-term campaign. People really like it.” Images shared with the hashtag are shown on a large-screen TV in the company’s Downers Grove, Illinois, headquarters, and soon will be shared on SharePoint with staff worldwide in Washington, D.C.; Gurgaon, India; Tokyo, Japan; Gauteng, South Africa; and London.

“You can’t underestimate the competitive aspect of this,” says Steven Ostrowski, director of corporate communications for CompTIA. “It’s really fun and amusing to see how people react to contests. The most mild-mannered people go crazy for it.”

That is true of another set of activities the company leads, its wellness events, says Hughes. A current contest to get as many steps as you can in a two-week period carries a prize for the winner and employees are teasing and egging each other on with social posts.

What made the #CompTIAPerks campaign successful, says Mahoney, is that it’s fun, but also that it was timed appropriately during the summer. Employees received an initial email detailing the campaign, with specific examples of the types of photos and shares expected. The kickoff was timed with the company picnic, which got the sharing started. Eileen Ristau, coordinator, marketing certifications for CompTIA, says she saw the initial email and “any time there is a prize, well … I started using the hashtag right away. I already tell my friends and family that I ‘work at Disneyland’ because the perks are so wonderful, so it’s nice to show my followers on social media.”

Susan Kostbar, senior manager, vendor relations for CompTIA, joined the company just 90 days ago and already thought the benefits were excellent. “I’ve tweeted things like visiting the world’s largest screen at Samsung, or how I’m sitting in my Florida room working and it’s fabulous. It’s really been fun.” Mahoney is also a new employee, having started at the beginning of this year. “It’s easy to list benefits like 22 days off, but now we can see how people are using these benefits, in their own words and pictures, and it highlights what makes it different to work at CompTIA.”

“For the last five years,” says Ostrowski, “we’ve received an award for being one of the top places to work in Illinois, which is given by a local newspaper, along with other organizations. This year, we are number three. I think this is another testament that we work at a great place.”