One of the myths about open source software is that IT organizations adopt it because it’s free. But it turns out that while cost is definitely a factor – especially in these tough economic times – the bigger issue is flexibility.

There’s a lot of administrative overhead associated with testing and deploying proprietary software in the enterprise. In contrast, open source software can generally be downloaded and tested by virtually any member of the IT staff without a whole lot of interaction with vendor salespeople and internal purchasing departments.

In fact, a new survey of over 500 IT professionals conducted by Zenoss, a provider of open source systems management software, found that 66.1 percent of the respondents said they use open source whenever possible. But what’s interesting about these results is that over 70 percent cited flexibility as a primary reason for using open source, which narrowly edged out lower costs.

At the same time, however, over 70 percent said that the current state of the economy played no role in influencing their interest in open source technologies.

According to Mark Hinkle, vice president of community for Zenoss, IT organizations are increasingly valuing the fact that they can adopt open source technologies on their own terms. Interestingly enough, the Zenoss survey also found that the IT people surveyed still value the support they get from vendors, the maturity of proprietary software and the features they get in those products.

Ultimately, while the Zenoss survey shows that mainstream adoption of open source software is already here, it doesn’t appear that the adoption of open source technologies necessarily means that proprietary technologies are going away altogether. But It does mean that proprietary software needs to be not only that much better, but a lot simpler to initially test and acquire as well. Click through for results from a survey conducted by Zenoss on open source systems management. Economy not playing as a big a role as most might think. 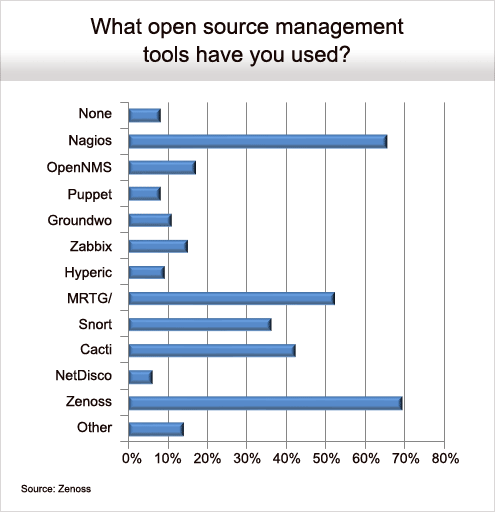 Zenoss would obviously lead the list, but many other tools are in play. Monitoring is still the number-one problem. A structured approach to IT management continues to elude most organizations.