When it comes to Hadoop, the popular perception is that the open source data management framework is limited to mainly batch-oriented applications. As a result, running any serious real-time analytics application would require deploying expensive, massively parallel database systems.

Looking to lay that misperception to rest, DataTorrent this week announced the general availability of DataTorrent RTS, an implementation of a real-time streaming processing platform on Hadoop. It can be deployed on just about any flavor of Hadoop.

DataTorrent CEO Phu Hoang says that with the advent of Yet Another Resource Manager (YARN) 2.0 for Hadoop environments, it’s now feasible to run all kinds of real-time applications on Hadoop. In fact, DataTorrent claims its platform can process more than one billion data events per second, which the company says is equivalent to processing 46 cumulative hours of streaming Twitter data in one second.

The implications of that for data warehouse environments is particularly profound. If Hadoop becomes the platform where those applications wind up residing, the cost of delivering a bevy of analytics applications will substantially drop. 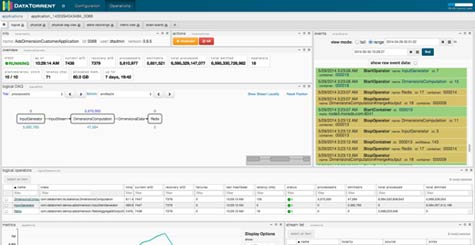 Rather than bringing data to the application, DataTorrent and other Hadoop proponents say it makes a lot more sense to bring Java applications to where the data resides. That not only eliminates the need for complex extract, transform and load (ETL) processes that often introduce errors, it reduces the amount of IT infrastructure that needs to be managed.

Quite a number of different types of processing engines can now be deployed on top of Hadoop using YARN. While no one knows which ones will ultimately gain market traction, it is pretty clear at this point that Hadoop has arrived as an application development platform.