Have you ever had a meeting where you’ve thought you were being crystal clear with a coworker of the opposite gender, only to find out that you and your coworker are on completely different pages, maybe even different planets? According to “Work with Me: The 8 Blind Spots Between Men and Women in Business,” by Barbara Annis and John Challenger (May 2013), 9 percent of men say they understand women, while 68 percent of women say they understand men. That’s a big difference and an even bigger gap in understanding.

According to Joanna L. Krotz, The Woman’s Playbook, women and men who work closely together often get tied up in communication knots, especially over issues that involve power, advocacy and managing the troops. That’s because the sexes have distinct ways of communicating. It’s been scientifically shown that the brains of men and women are hardwired differently. Men’s brains are typically 10 percent larger than women’s and tend to have stronger left-brain skills. Women, on the other hand, typically have more nerve cells in certain areas of the brain and have a larger corpus callosum (connecting the left and right sides of the brain). As a result, men are generally stronger at analytics and abstract concepts, while women are more intuitive, swifter to pick up on nonverbal cues and process information faster.

Hormones and cultural factors also heavily influence how men and women communicate. Women tend to be more people oriented and better at multitasking, while men are better at single-minded focus and top-down motivation, exchanging rewards for results. Male vs. female conversation objectives often differ, as well — for example, status vs. support, report talk vs. rapport talk, independence vs. intimacy, advice vs. understanding, and information vs. feelings.

In this slideshow, Krotz has identified six scenarios where communication between men and women frequently jumps the rails and provides tips for getting back on track. 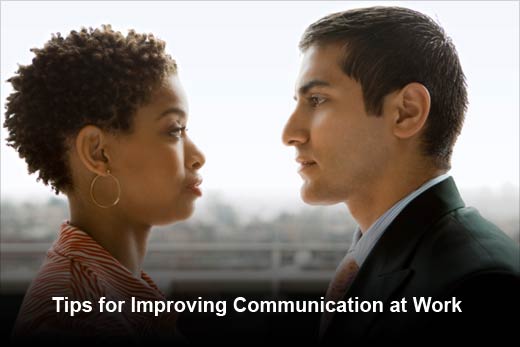 Tips for Improving Communication at Work

Click through for six scenarios where workplace communication between men and women often jumps the rails, as well as tips for getting back on track, as identified by Joanna L. Krotz, The Woman’s Playbook. Her way: Women tend to ask lots of questions before beginning work.

His way: Men simply roll up their sleeves.

The result: Men assume women aren’t up to the job. If they were competent, reason men, then women wouldn’t be asking so many questions. But in fact, women typically verify and validate data before starting tasks, sometimes to improve their performance. “Women gather information by asking questions, but men view question-asking as a sign of weakness,” says Sandra Beckwith, author of “Why Can’t a Man Be More Like a Woman?” The reverse scenario is that men hate to ask for information or guidance (big news, right?). But women assume that if men don’t ask questions, they must know enough to complete a job. That’s often not the case.

Advice: For women bosses, it’s a good idea to verify that men have enough knowledge to complete a task. Oversee the work in the early phases or offer help without being asked. Her way: Women frequently use anecdotes or illustrations about home or relationships.

His way: Men rely on metaphors about sports or war.

The result: Dialogue can hit a dead end. Women often do not follow the touchdown, full-court-press images and vice versa. One communications consultant hit just such a conversational wall during a sales pitch. She told a client that follow-up training would be “icing on the cake.” “I envisioned icing as the finishing touch that completes the project and makes it most presentable to the receiver. But his perception of icing was of sweet, unnecessary, junky stuff that you scrape off.” Needless to say, she didn’t nail the deal.

Advice: Don’t simply gender-reverse images to communicate. Instead, consider your audience and use gender-neutral images (nature, movies or weather come to mind). Or use images you like, but with an explanation of what you mean. Her way: Growing up, girls tend to establish relationships.

The result: Men and women impose authority differently. “Women tend to be more collaborative in the workplace and put relationships first. But men routinely challenge and expect to be challenged. Each often finds the other’s style ineffective or insulting. Women see men as ham-fisted or insecure when they come on so strong. Men think women lack confidence or conviction because they work hard to get buy-in. Neither, of course, is accurate.

Advice: To jump the divide, borrow a bit from the other’s style. Men can try a more collaborative approach. Women need to take over more often. Her way: Women like to tell and hear stories, including the trials and errors, turnings and re-turnings. It’s their way of connecting and building the relationship.

His way: Men cut to the chase. The route you travel is inconsequential. What matters is the destination.

The result: Each sex becomes too impatient to hear the other. Usually, women want details to demonstrate concern, to vicariously participate in an experience or to verify assumptions. By contrast, men want only enough details to draw the big-picture message. Everything else gets tossed as trivial.

Advice: Again, each sex can benefit from the other’s behavior. Men ought to explain their thinking and not simply jump to conclusions. Women need to get to the bottom line more quickly. Her way: She tends to treat male colleagues like her husband or boyfriend.

His way: He often handles women associates like his wife or girlfriend.

The result: A subtle and tricky gender miscommunication. It’s also one that people are loath to examine.

Typically, men and women bring into the office some version of the sexual dynamics they have at home. We also gravitate to workplace confidants, mentors or employees who resemble the intimates in our personal lives, especially spouses. That means you’ll discover quieter struggles in business of whatever people’s fights are about at home, such as who’s right and who’s wrong or disagreements about money.

Advice: If you’re in some kind of standoff or you feel like he or she “doesn’t understand” you, take a break to think it through. Make sure you’re not importing a personal issue into a business environment. Her way: Women are generally more comfortable talking about their feelings.

His way: Men prefer to dwell on the facts and skip the feelings.

The result: Communications trouble. All communications consists of both intellectual and emotional elements. Misunderstandings arise when we ignore one side of the two dimensions. That doesn’t mean everything has to be fifty-fifty, but miscommunications can greatly improve just by acknowledging some level of feelings or intellect.

Advice: So a man might explain to a woman that he knows some conversations might be difficult, and then say that it’s also difficult for him. That would change the mood and point to his feelings. A woman might dial down emotional intensity by trying to be more analytical and laying out the issues in an organized way. She can then list those issues, one by one, and that analysis, too, would change and encourage dialogue.