Most software-as-a-service (Saas) applications get subscribed to first by a line of business manager who, before too long, winds up dumping the management of that application back on the internal IT department. That internal IT organization can then find itself managing hundreds of SaaS applications that each have their own management consoles.

To make it simpler to adjust to that new SaaS application reality, BetterCloud has unfurled a namesake management platform that is itself delivered as a SaaS application. Initially, BetterCloud supports G Suite, Slack, Zendesk and Dropbox cloud services. In 2017, BetterCloud CEO David Politis says, additional support will be provided for a dozen more applications, including Salesforce.com.

“Our goal is to surface the operational intelligence the IT organization needs,” says Politis. 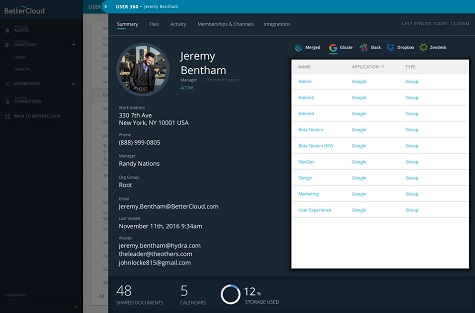 Politis says BetterCloud also includes an automation engine that IT organizations can employ to simplify the management of processes spanning multiple SaaS applications.