We have data, lots of it. We want access to that data anytime, from any device. We want to access that data now, not 20 minutes from now. This always-on, high-data volume demand has significantly increased the strain on network bandwidth.

A recent study conducted by Emulex Corporation, a leader in network connectivity, monitoring and management, found that hyperscale and multi-tenant requirements are driving demand for higher network bandwidth to manage vast volumes of data, lower latency to accelerate application delivery and performance, and increased security to meet service-level agreements (SLAs) and regulatory and compliance requirements. Organizations have responded by increasing their network bandwidth, and more than 77 percent of respondents running hyperscale environments say the move to the cloud has already necessitated the upgrade of their networks to at least 40Gb Ethernet (40GbE).

“The move to hyperscale is entering a second phase from the cloud providers to managed service providers (MSPs) and enterprises. This survey highlights that like every major transition in IT infrastructure, changes are required and IT professionals have to re-think almost everything they have done in the past,” said Shaun Walsh, senior vice president of marketing, Emulex. “Beyond the concept of hyperscale models, we see very specific technologies being implemented such as OpenStack, SDN and NFV. Each of these changes has performance, operational expenditure (OPEX) and team skill implications for application, networking and storage infrastructure. We are working with leading end users, ecosystem partners and OEMs to bring the right connectivity, monitoring and management tools to make these solutions viable and operational.” Are You Ready for Hyperscale?

Click through for results from a study on how hyperscale deployments are affecting network bandwidth, conducted by Emulex Corporation. Hyperscale and the Cloud 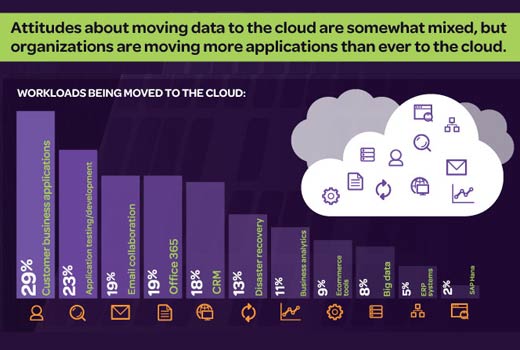 Top Workloads Most Frequently Migrated to the Cloud