Key Reasons for Businesses to Upgrade to Windows 10

Windows 10 promises to be the most widely adopted operating system ever, and Microsoft hopes that on the desktop, it will hit one billion computers.

Expectations are high because Windows 10 represents a major departure from Windows 8, which was not well-received by businesses. Microsoft learned from its mistakes. The new operating system is user-friendly, and offers cross-device familiarity and universal apps. This increases the presence of Windows tablets and phones within organizations, which is key for today’s increasingly mobile workforce. In addition, Windows 10 enables enterprise apps to be built “once” and deployed/optimized on all devices.

Most significantly, Cortana, Windows 10’s voice-activated assistant, can be a change agent for how users interact with the desktop PC. Voice-enabled commands will likely change a user’s behavior more than touch screens did. Because while touch is good for tablets, phones, and even laptops, it is not for desktops — voice makes the difference. Voice recognition and machine learning will enable new and innovative scenarios.

In this slideshow, Thomas Koll, CEO of Laplink, takes a deeper look at the key reasons businesses should upgrade to Windows 10. Why Businesses Should Consider Upgrading to Windows 10

Click through for a deeper look at the key reasons businesses should upgrade to Windows 10, as identified by Thomas Koll, CEO of Laplink. Windows 10 represents a return to the more familiar and popular Windows 7 user interface elements, combined with some of the improvements found in Windows 8/8.1. Plus, it has apps. The Start Menu displays most used apps and folders, as well as newly downloaded software, and you can arrange the app tiles however you want. Live tiles show recent updates, such as weather, Facebook posts, news and more. Users can keep the Start Menu on the side or expand it to full screen, as they wish. The Start Menu is easier to navigate as well, with the power button back at the bottom of the Start Menu (in Windows 8 the power controls were difficult to find).

Windows 10 also features design changes, like taskbar icons flowing at the bottom when they are opened. It also introduces snappable windows, which is great for multitasking. Instead of building separate operating systems for desktop and mobile, Windows 10 focuses on one, universal system for all devices. Microsoft said this represents the latest step in its “platform convergence journey.” It wanted to allow one app to run across every Windows device — phones, tablets, laptops, PCs, and even Xboxes. The goal is to drive scale, deliver unique experiences, and maximize developer interests.

The fact is that consumers today don’t rely on just one device. Forty percent of people switch devices mid-activity, and people use different devices for different purposes. This is just as true in the business world, where mobile work is on the rise. With its emphasis on interoperability and universal apps, Windows 10 makes switching back and forth between devices a breeze. 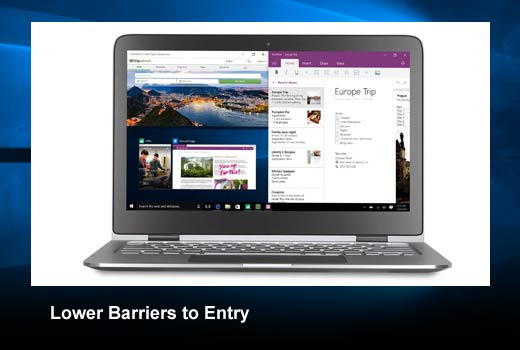 A common family of devices will drive down costs to users. Plus, Windows 10 doesn’t need faster hardware. It makes device management easier, and comes with security improvements, support of two-factor authentication, and a better browsing experience. All of these things lower the barriers to entry, make Windows easier to implement and use, and reduce the cost of ownership. Windows 10 offers continuous updates. Rather than releasing updates in big swoops and needing users to download them, Microsoft will release updates on a rolling basis (more like Apple). Windows 10 will make it easier for businesses to deploy upgrades. By creating the notion of Windows-as-a-service, we will see more small improvements in short periods. Windows 10 might morph over time to take users’ feedback into consideration, which is now commonplace in software development and product marketing. This represents a major shift in the overall company’s approach. Cortana is the Windows version of Siri. Cortana has natural language processing capabilities and syncs across devices. Not only is “she” actually helpful, but she also has a sense of humor. Cortana has total control over Windows’ search functions. She will search through your apps and files, the Internet, and the Windows Store to help find answers to questions. She can also help users find hidden settings with a couple of quick commands, rather than laboriously searching through the control panel.

Cortana enables employees to work faster and more efficiently, while getting full use out of what Windows 10 has to offer.