As far as programming languages go, PHP is still the primary one used to build most Web applications in the enterprise. Today, Zend Technologies announced that PHP is likely to continue in that role for some time to come with the release of a Zend 8 upgrade to its PHP platform that adds support for Docker containers and third-party IT operations tools.

The announcements came at the ZendCon 2014 conference, and Zend CEO Andi Gutmans says that Zend is making a concerted effort to modernize all aspects of PHP application development and management. To that end, Zend is now compatible with the Puppet IT automation and Bamboo continuous integration frameworks developed by Puppet Labs and Atlassian, respectively.

In addition, Zend announced that its PHP platform is now compatible with IBM Power 8 servers running Linux and that it has upgraded its Z-Ray automated debugging tool to add support for Magento, Drupal, WordPress, Zend Framework and Symfony application development frameworks. Developers can also take advantage of application programming interfaces to extend Z-Ray functionality into their own applications, and a Z-Ray Live! feature now provides the visibility into requests coming from mobile and web services API calls and which Web pages in an application are the worst performing. 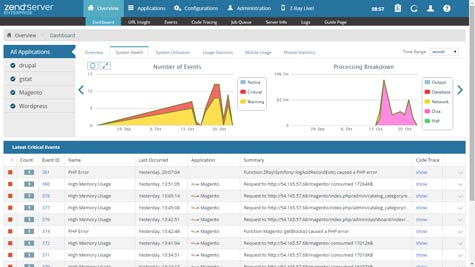 Gutmans says that Zend is committed to further extending the PHP ecosystem and will give organizations access to all the latest development frameworks and DevOps tools to create a more agile IT department. Rather than requiring organizations to adopt an entirely new programming model, Gutmans says Zend 8 gives IT organizations the ability to extend their existing skills to achieve that agility.

While most IT organizations have multiple programming languages in their toolkits, PHP has proven that it will be around for the long haul. With IT organizations building more Web applications than ever, the challenge is finding a way to make managing the development and deployment of those applications as simple as possible.